Split the Difference: How to Shoot the Perfect Medium Shot 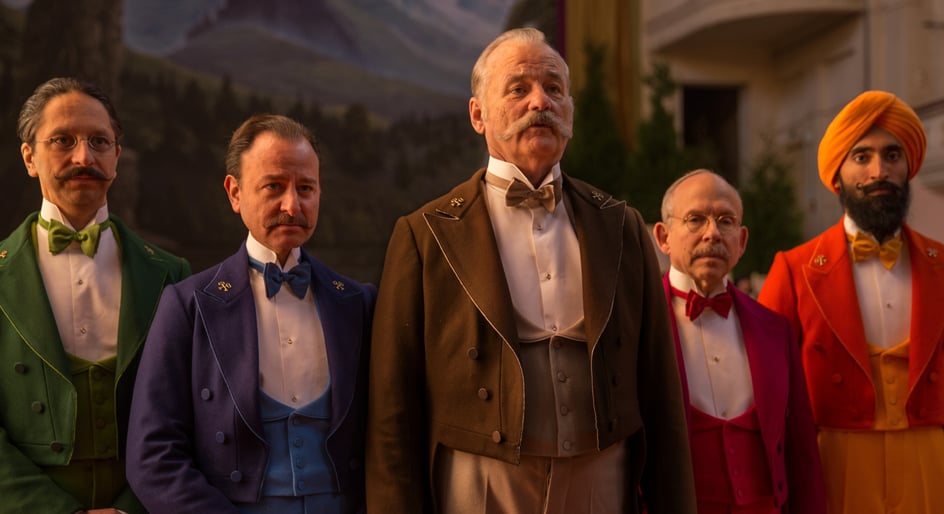 In the world of cinematography and shot selection, people say that comedy lives in the wide and drama lives in the close-up. So, a question: What does that mean for everything in between?

Today we’re going to dive into the often neglected yet critically important medium shot. While not as comprehensive as its wider counterparts, nor as emotive as its closer-up brethren, the medium shot is indeed an important shot type which every filmmaker should study and understand.

And truth be told, the medium shot might be the shot type of the future as its waist-up approach has become quite popular with the YouTube and social video content generation. But what makes a medium shot a medium shot actually?

And, more importantly, how should you approach shooting medium shots in your film and video projects? Let’s take a look (not too wide or too up-close) into the world of medium shot types and how you can harness it for your cinematography.

What is a medium shot?

As we’ve discussed with our other shot types like establishing shots, wide shots, master shots, close-ups and of course the all-important cowboy shot, the medium shot is its own unique shot type that is very much exactly what it sounds like.

(For more shot types, check out our list of (almost) all of the camera shots for film and video.)

Simply put, a medium shot is a shot which stretches from around the waist (or sometimes the knees) of a subject up to the head. It’s neither too wide (which would be from the feet or below up) or too close (which would be only from the chest up).

Yes, a medium shot is shot from a medium distance. It’s best to think of a medium shot almost as your standard shot type (especially from the lens of someone creating content for digital or social channels).

What is a medium long shot?

We also need to talk about a few different types of medium shots. For example, let's go over the medium long shot definition which — as its name implies — is a combination of a medium and a long shot. If you're using a person as an example the medium long shot goes from just below the waist to just above the head of a subject.

The medium long shot is also sometimes referred to as a medium wide shot or a three quarters shot and is used to pick up bigger clues about body language and motivation. Medium long shot frames are also meant to give more context than your usual medium shot, waist shot, over-the-shoulder shot or close up shot and can sometimes even be used as establishing shots for certain scenes.

What is a medium close up shot?

Speaking of other combination shots though, we also have to highlight the medium close up shot. As far as camera shots go, this camera shot is all about combining facial expressions and body language. As opposed to a medium long shot the medium close up isn't really meant to frame multiple subjects, instead it's a mid shot most often used as a reaction shot.

Like the close up shot, the medium close up shot can vary depending on camera movements or if there are multiple characters in the frame.

To get a better understanding of what a standard medium shot looks like and how it works within a scene or story, let’s take a look at how medium shots have been used throughout cinema history.

Keep in mind that while we have these set shot types and classifications today, in the real world these shot types are seen as loose guidelines to help inform a director and cinematographer’s framing decisions.

Many of these examples might range from medium long shots to medium close-ups (or anything else in between). But the fundamentals of how these medium shots work as a tool in your overarching cinematographic arsenal are relevant and important to study.

Alright, let’s go back about as far as we can to the days of silent or black and white cinema.

Charlie Chaplin gave perhaps his most famous and memorable performance of all time in The Gold Rush, a comedy classic from 1925. Notable for many gags and shots which have influenced all types of films and media since, the film is also a great example of how the medium shot was conceived.

As you can see in this iconic “potato dance” scene from the film, Chaplin needed to pick a shot which would frame up his character from the tabletop up to his face.

As he performs his potato dance with his dinner, the shot is wide enough so that you can see the dancing potato feet while still being close enough so that audiences can enjoy the funny expressions on his face. 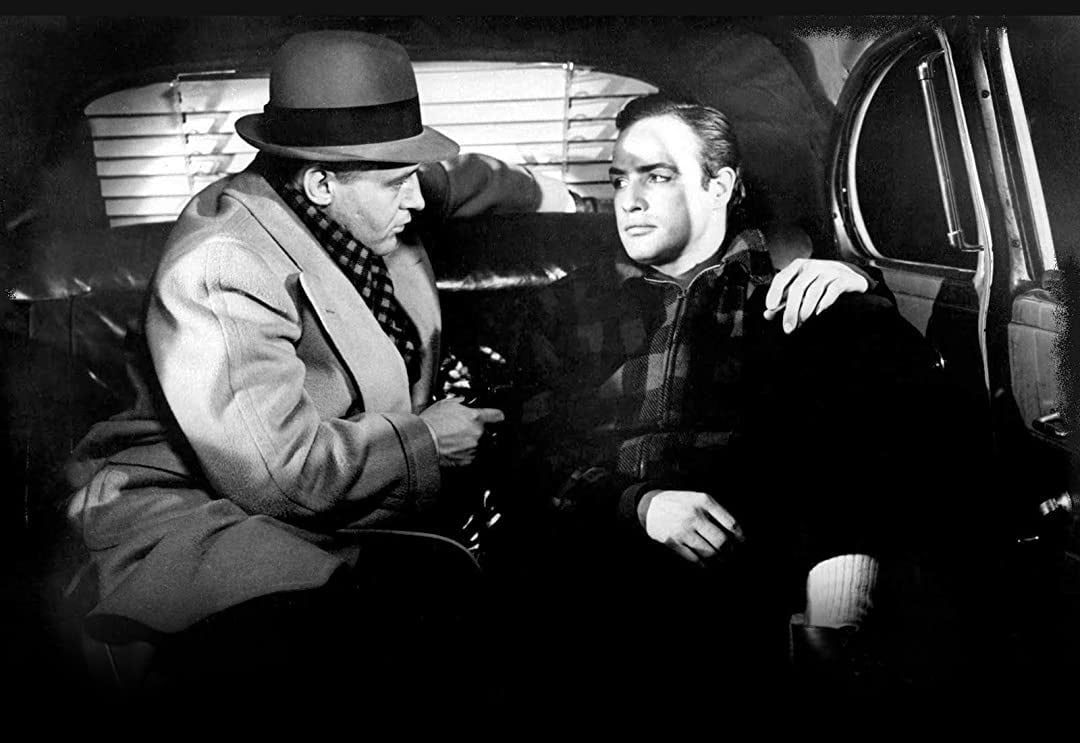 This medium shot would become one of the standard shot types across decades of classic cinema. As you can see in this shot from one of the famous scenes from On the Waterfront, it was indeed a favorite of classic Hollywood.

The medium shot gives enough spatial awareness to let the audience know where a scene is taking place and who is in it, but it’s still tight enough to focus on faces and performances without taking up too much set space for lighting and framing).

As you can see in the frame above, this shot gives a great deal of information about what’s going on in the conversation. However, even in the sequence for that shot, it would still only be used for a partial amount of the scene’s coverage, as filmmakers would usually prefer to move in closer for close-up shots as the drama of the scene would progress.

It wouldn’t be until the more experimental and artistic filmmakers of the 1960s (and film movements like French New Wave) before the medium shot became more of a full-coverage tool rather than a quasi-establishing shot type.

For example, take this scene from Agnès Varda’s famous film Cléo from 5 to 7. By using a long-take tracking shot, Varda chose to stay in the medium shot for the majority of the action and conversation.

This allows the audience to really stay in the scene, so to speak, as we feel as if we’re a part of the conversation ourselves...or at least an up-close observer who just happens to be next to this couple in the park.

Still, at this point, the medium shot is used out of necessity as it requires some amount of camera movement. Pushing into a close-up might have simply been too tricky to perform. 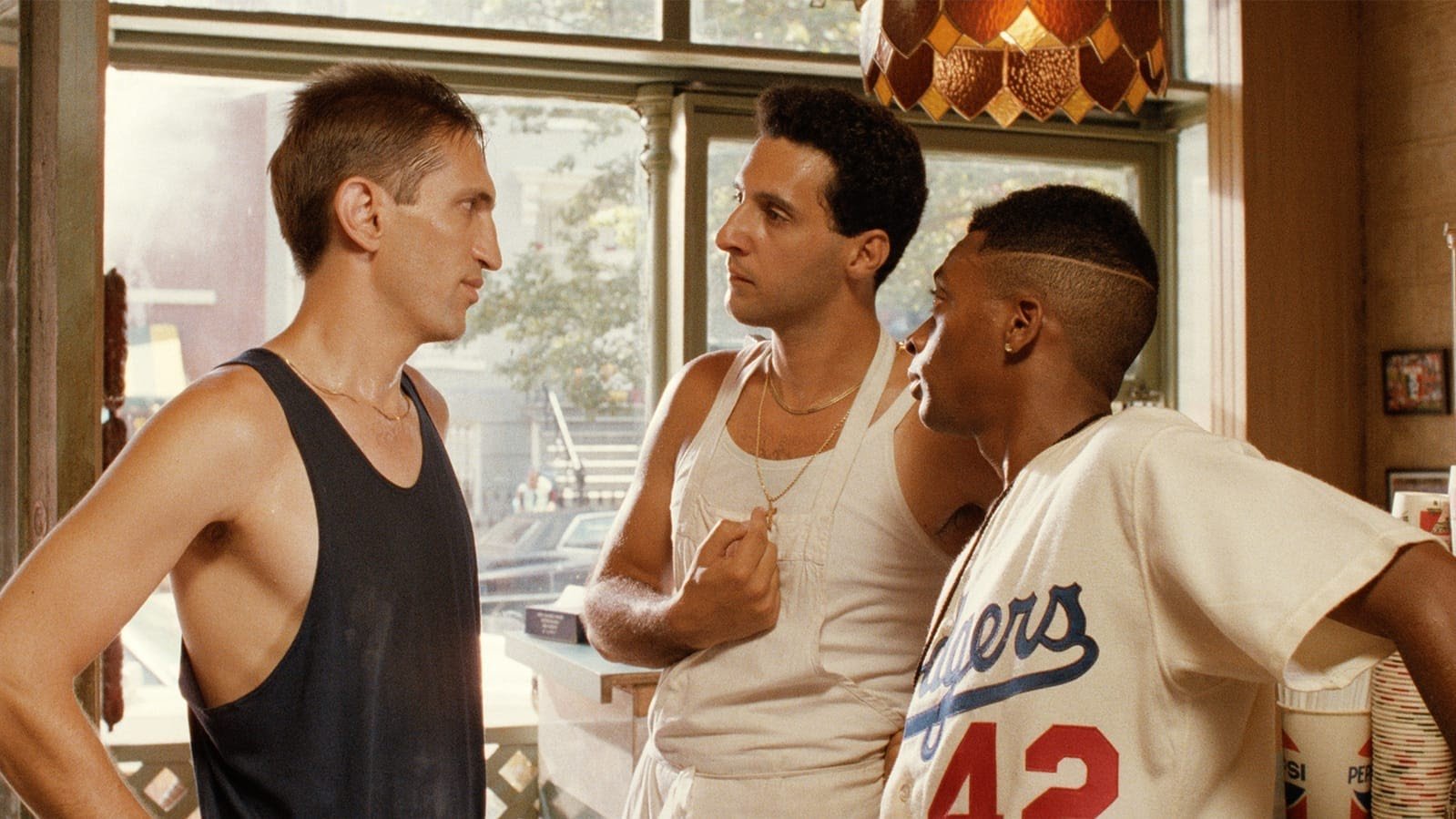 It wasn’t really until the modern cinema of the 1980s and 90s that filmmakers truly felt capable of more complex camera moves and a complete array of shot selection and types.

Spike Lee, in his breakout feature film Do the Right Thing, was able to show off his astute film history knowledge by crafting scenes which made a diverse use of these different shot types.

In the frame above, Lee’s character is in conversation with two others as the camera stays wide enough so that we can see the ever-present New York City streets behind them. But the camera is also close enough that we’re really only focusing on the characters’ faces and expressions.

A good medium shot like this is really about finding that balance.

We have plenty of superhero movies and mega-blockbusters that we could highlight from this modern age of contemporary film and television. But it’s fascinating to think that the medium shot still remains popular with filmmakers who want to emulate this classic or post-modern style.

Take this scene from Wes Anderson’s fanciful feature The Grand Budapest Hotel, which almost uncharacteristically makes heavy use of the medium shot in this back-and-forth conversation scene.

We could have seen more of the setting in a wide shot, or more facial details in a close-up. But these medium shots create a fun sequence in which we see these characters as they see each other — and still with plenty of room for Anderson to have his fun with symmetry and setting.

What makes a good medium shot?

So, the question remains: What makes a good medium shot? And, more specifically, how do you actually approach framing up this shot type?

As mentioned above, a medium shot’s name comes from its relationship to wide shots and close-up shots. It’s not the only other option, but it is definitely one of the most standard and practical shot types for framing up a subject (or subjects) from a normal length.

The medium shot works best when the focus is ideally on just one (or two or three at most) subject, where the audience can really connect with their face, acting, and emotions.

As such, lighting, composition, rule of thirds, and other techniques should all be working in concert to help the audience really connect with this subject (or object) of their focus.

Here are some basic tenets of what makes a good medium shot:

What makes a bad medium shot?

On the other hand, let’s look a bit at how you could possibly mess up shooting a medium shot. And what you might want to do to avoid shooting a bad medium shot in your films or projects.

Here are some of the main reasons that a medium shot fails:

The crux of the medium shot is that it’s not really meant to be a challenging shot type in the way that wide shots or close-ups often can be. The medium shot is your safe shot where you can really clearly tell what is going on. It’s almost meant to not feel like a shot type at all — instead, it functions just like a straight thematic conversation with a character.

You don’t have to overthink it, but to avoid any issues with medium shots you really just need to keep things simple. Don’t add too many elements, characters, or obstructions.

You can still paint with lighting and composition, but unless you really aim to confuse, don’t let the shot distract your audience from connecting with the main character.

Moving on to how to actually shoot a medium shot, it’s really all about finding the right composition, shot angle, and balance within your other shot types and overall scene construction. While not every director might work this way, it’s standard to start shooting a scene with the wide shots, then move into the mediums, then finish with the close-ups.

This flow allows for more focus on actions before moving on to  emotions. The medium shot, of course, is a blend of the two. Which means you want to shoot them with a bit of versatility to allow for movement and action, but still keep your cinematic eye on the face for expressions and emotions.

Here are some tips for actually shooting medium shots:

It’s also worth mentioning that with a medium shot type, you have plenty of options at your disposal for recording audio. Unlike wide or long shots, there should be plenty of space above, below, or to the sides of your scenes to have a boom mic (or other mic types) close enough to record.

A standard boom mic held above your main subject is ideal for any narrative film. However, if you prefer lapels or other mics for different video projects, those work too.

If you’re interested in learning more about working with different shot types and developing your cinematography skills, here are some extra articles to help you on your way: