There are many rules to learn in the world of film and video. Rule number one: make sure you remember where you put the lens cap after you take it off. Rules number two through a million: learn how to break all the rules as often as possible.

It’s funny to imagine that at one point in history, filmmakers had to decide just how they would approach shooting the most basic of scenes. Take a simple set of shots of two people talking, for example. Where do you put the people in these shots to convey that they’re actually conversing?

The 180-degree rule is one of the many filmmaking rules that was founded out of necessity. It’s a crucial part of how filmmakers shoot scenes even today, as well as informs how audiences have learned to synthesize visual information in film and video content.

However, as with every film rule before it (besides the lens cap one), it’s also one that can (and sometimes should) be broken. Let’s take a moment to study this infamous film rule, as well as explore how you can use it — or break it — in your film and video projects. 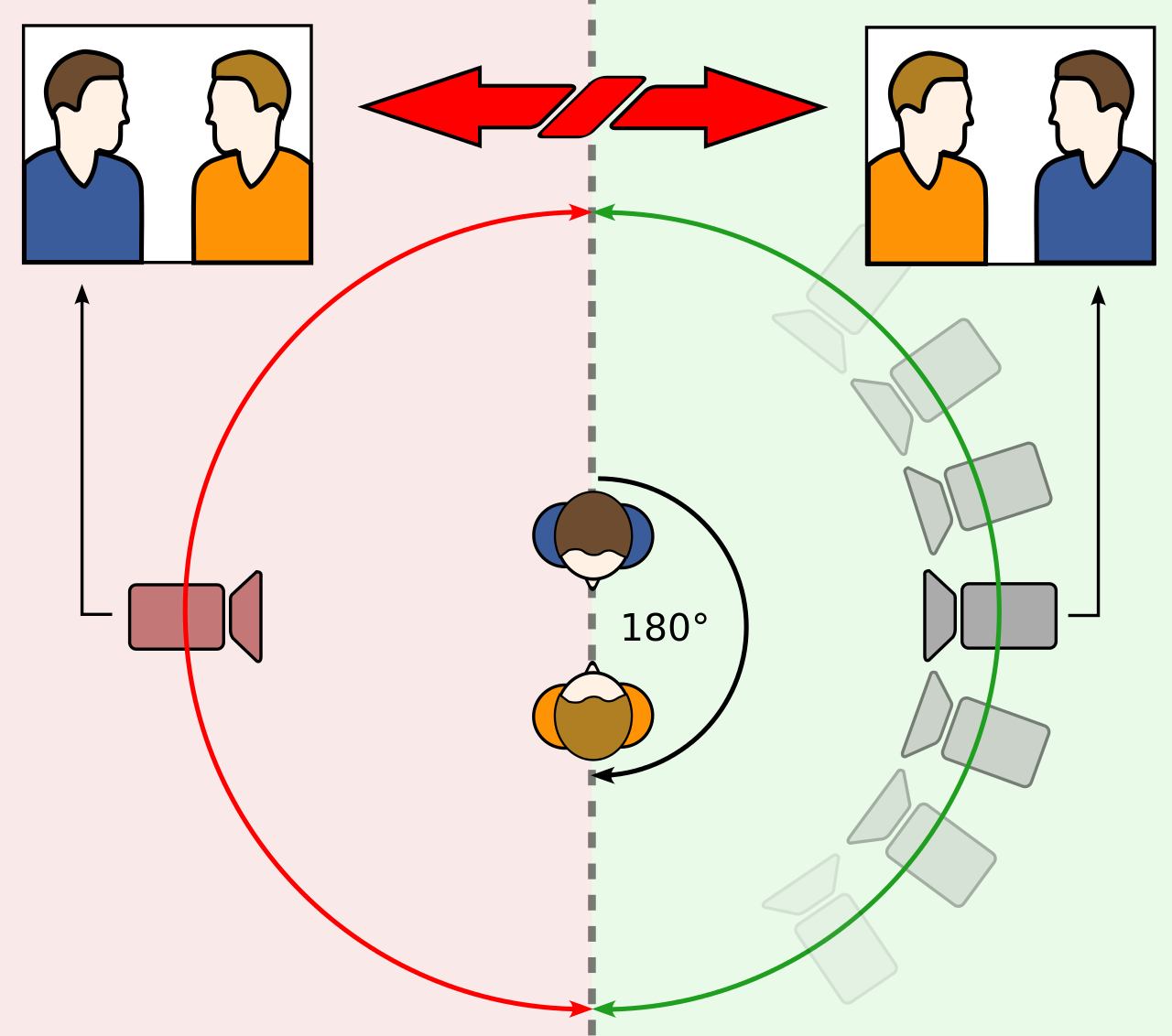 Let’s start by simply defining and explaining what the 180-degree rule is and why it exists. By a basic definition provided by Wikipedia, the 180-degree rule “is a basic guideline regarding the on-screen spatial relationship between a character and another character or object within a scene.”

As you can see in the accompanying image above, the rule states that the camera should be placed on one side of an imaginary (or real if you want to be technical about it) axis which is formed between two characters.

The 180-degree rule has been well covered in beginner film courses both in schools and online, and you can watch some great tutorials further breaking down the concept like the one below.

How to use the 180-degree rule

Before we dive into examples of the 180-degree in use in film, let’s spend some time exploring the basics of how a filmmaker actually should use the rule in the first place.

As you can tell from the diagram and definition above, the 180-degree rule appears pretty straightforward and cut-and-dry in terms of how it’s set up. And it’s true, when you have a simple scene with just two actors in conversation, it is quite easy to execute.

You simply draw your imaginary line between these two actors based on how they are positioned. You put your camera on a tripod and keep it on one side, and you instruct your actors to stay on the other for the scene. Boom — cinema magic!

However, things get trickier when you start adding more variables like more actors and performers and putting your camera into motion. For most film and video situations, the 180-degree rule can quickly become more of a loose guideline rather than a hard-set rule.

The imaginary line that you create, for example, can be set and reset throughout a scene depending on which two (or more) characters are currently in conversation.

Also, as modern filmmakers are more and more likely to ditch the static tripod shots and put their cameras in motion on gimbals and handheld rigs, the imaginary line can indeed be pushed at times, if not outright broken… as long as it's done with cinematic purpose.

When and how to break the 180-degree rule

Alright, we also have to talk about breaking the 180-degree rule.

Chances are, if you turn on any television or streaming show, or go to any modern movie, you’ll probably see at least a few examples of the 180-degree rule being broken in a scene here or there (if not being completely ignored on the whole for many modern action or arthouse films).

However, in the majority of these instances, the 180-degree rule is still followed for most of a film’s production. The breaks to the rule come at strategic times within a film’s narrative and are done by filmmakers as a way to make the audience feel a sense of unease.

It’s similar to how filmmakers use techniques like dutch angles or jump cuts as a way to let the audience know that something is off, but you’re not quite sure exactly what. The 180-degree rule is also often broken simply as a means of necessity when shooting chaotic scenes with lots of motion and camera movement.

Fight scenes in modern action movies are notorious for putting the camera in the action, which (like their fighting protagonists and characters) can often get confused in the heat of battle.

Still, even at the heart of many of the times that the 180-degree rule is broken, it is done only within the confines of the story overall and at the direction of a filmmaker who has already established it early in the project.

Examples of the 180-degree rule in action

However, just as with every rule and style, filmmakers would continue to experiment and refine the 180-degree rule over the years, eventually choosing when and how to push and break it. Let’s explore some of the biggest moments in the rule’s history.

Starting as far back as we can, let’s first look at one of the most famous films in early cinema history: The Great Train Robbery. A smash hit at the time, this cinematic experience is reported to have literally blown audiences out of their seats with its innovative filmmaking and storytelling techniques.

However, by modern standards, it of course looks dated and antique. In particular, it’s use of a static camera almost feels like you’re simply watching a stage play. Which, in truth, was probably how early filmmakers approached their first projects. The 180-degree rule is in use, but in reality probably wasn’t even discussed at this point as moving the camera was both laborious and almost controversial at this point.

However, as we begin to advance throughout the years, the camera did indeed become light enough to reposition from shot to shot. Albeit, it still needed to stay quite static on tripods and usually with exact compositions in mind. By the time Gone with the Wind came out, Hollywood was in full swing and productions were flying off the line.

This is where the 180-degree rule became a fully realized hallmark of classic filmmaking. These early directors and cinematographers were careful to establish this imaginary line and not cross as they didn’t want to confuse or hamper the audience’s understanding of these scenes.

Take the scene above for example, the camera is put into several different shot types including wide shots, medium shots and close-ups, yet it perfectly stays on the correct side of the 180-degree rule allowing the scene to flow naturally and without confusion.

Still, as both film technology and audience expectations advanced, filmmakers began to experiment more and more with finding new and innovative ways to challenge audience expectations. No filmmaker was perhaps more famous for technical and thematic film achievements than Stanley Kubrick, as you can see in full display in this scene from his psychological horror film The Shining.

In this infamous scene in the iconic red bathroom, Kubrick chooses to intentionally break the 180-degree rule several times. He does this on purpose as he is fully aware that this sharp break (the camera jumps completely across the 180-degree line) will make audiences feel a sense of unease and confusion as the conversation is meant to startling to the main character and the audience alike.

From there, modern filmmakers would eventually move more into hybrid and digital film processes which would include much more flexible and lightweight cameras, as well as a host of digital effects at their disposal. Perhaps the most textbook example of this comes from the 1999 action sci-fi classic The Matrix which turned the 180-degree rule on its head with its revolutionary 360-degree camera shot.

Made famous from the sequence above, as our hero learns to dodge bullets the camera is put into motion circling the character in cinematic slow-motion. Achieved by an ingenious setup of cameras circling the actor on a green screen set, this single camera move almost single-handedly threw the 180-degree rule out of the window — at least in terms of action and stunt choreography.

Finally, by today’s standards, the 180-degree rule is a nice concept to keep in mind, many modern filmmakers have moved onto re-thinking how films and scenes are shot and constructed overall. Take the experimental indie film Enter the Void for example which removes the concept of static tripod shots altogether, instead opting to put the camera into permanent motion as a continuous POV shot strung together from start to finish of the film.

Of course, from the floating perspective of a character’s hallucinations, the 180-degree rule is quite impossible to follow as the camera moves at its leisure throughout scenes and sequences.

However, while this example might be a bit extreme, the 180-degree rule is indeed open for interpretation at this point as audiences have become fully aware of it, yet also open to enjoying its helpfulness, as well as embracing its abstractions.

As you can see, when working with the imaginary line, the 180 degree rule states that any screen direction should include a neutral shot to set up the basic idea of where the on screen characters are placed. Whether this be for a dialogue scene or other type of uninterrupted shot, you'll want your camera position and screen direction to keep this imaginary axis (or invisible axis) connected between these two characters.

You can still mix in an array of different shot types like extreme close-ups, wide shots, or other neutral shot options. However you'll simply want to keep this straight line in mind as you established orientation and pick the next shots in your sequence following this important rule.

If you’d like to read up on more filmmaking and editing theories, here are some additional great articles and resources to check out from the Soundstripe blog.

What Is B-Roll, Exactly? And How Should You Use It?

How to Use Establishing Shots in Your Films and Videos

How to Shoot an Effective Point of View Shot