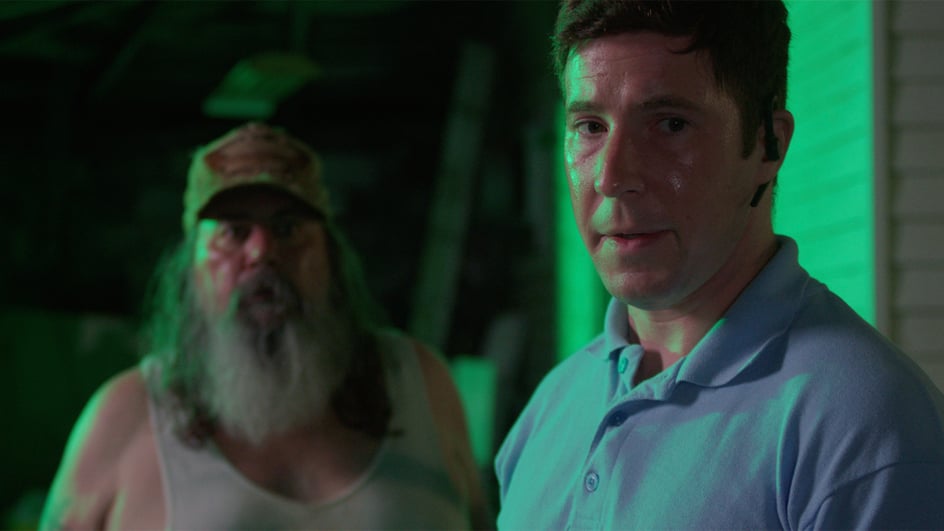 While Austin, Texas might be best known for its mega-conferences and film festivals like South by Southwest and Alamo Drafthouses’ Fantastic Fest, there’s actually one other terrific film festival that is widely regarded as the best writer’s film festival in the world.

For one week in late October thousands of talented and aspiring screenwriters head to the Austin Film Festival to submit their scripts and pitches for various competitions, share their ideas, and ultimately find inspiration.

And – for filmmakers of any level — one of the best ways to get inspired is to simply watch lots of new films filled with up-and-coming voices and fueled by great writing.

At this year’s AFF we sat down with writer and director Daniel Lafrentz to talk about his soft-boiled detective short film Saint City (which also serves as the pilot episode for a potential series) to chat about his filmmaking process.

Lafrentz and his team shot their project in the New Orleans area (where Lafrentz resides) and on the back of a $15,000 grant which the filmmaker received from Panavision from a previous project won the Jury Prize at the 2019 New Orleans Film Festival (Lafrentz’ directorial debut The Long Shadow).

Notable highlights from the interview include insights into Lafrentz and his cinematography partner Stephen Berke’s production flow, tips for turning a pilot into a short, and advice for those looking to begin their careers outside of “traditional” mainstream hubs like New York and Los Angeles.

Soundstripe: What got you into filmmaking? What was your original touch point for video production?

Daniel Lafrentz: My first exposure to filmmaking was making backyard home movies with my friends. I’m not sure whether to start the clock at my 6th grade Jurassic Park sequel (pre-Lost World) or when I was a senior in high school and roped every friend I had into making a short film asking my girlfriend at the time to prom. After that, I was accepted to the UCLA School of Film & Television where I got my BFA in Production. That’s where I really learned the basics. I’ve always been a director and writer at heart. Learning to Produce came out of necessity and wanting to continue making more of my own work.

Soundstripe: Your project Saint City doubles as both a short film and pilot proof-of-concept show, what was your approach finding this balance?

Lafrentz: I did another proof-of-concept previously for a series that I was not the creator of that acted more like a prologue to a pilot by ending on a cliffhanger. While it’s still one of my favorite pieces of work, I learned that ending a short film/POC on a cliffhanger isn’t the best idea because the audience wants more but you don’t have anything left to give them! (Aside from a pilot script.) With SAINT CITY I wanted the short/POC to be a self-contained story that could be enjoyed on its own. Instead of introducing an overarching season-long narrative, I focused more on setting the tone and establishing the key characters and their relationships which are really what would be the heart of the eventual series. 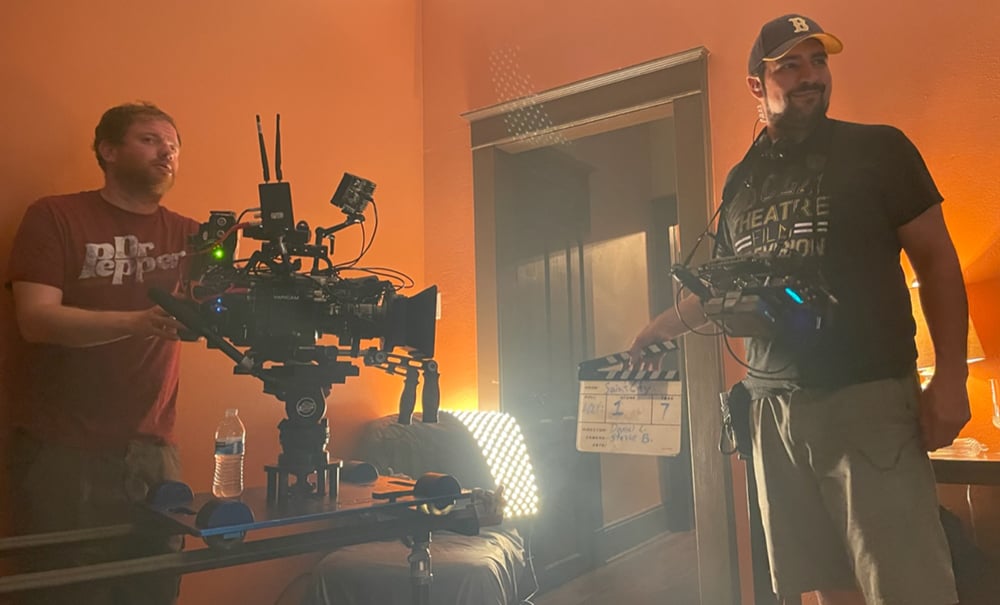 Soundstripe: With your world premiere here at the Austin Film Festival (known as a writer's film festival), tell us about your writing process for Saint City. What were some of your script or screen inspirations?

Lafrentz: The idea of this dad-ly PI came to me on a layover at an airport and I literally brain-dumped a version of the short in an hour. As I started to look at other filmmakers who have subverted the tropes of the noir/PI genre Shane Black was one of the first writers/directors who came to mind. Kiss, Kiss, Bang, Bang and The Nice Guys were both big references for me both tonally and visually. The Coen Brothers are another reference. (Cliche, yes, but they’re classic for a reason!) Deadpan humor and absurdity of the mundane are very much in the fabric of SAINT CITY.

Soundstripe: The project filmed a lot on real locations around New Orleans, what camera did you use and what was your set up for shooting interiors and on the streets?

Lafrentz: We were a small crew of about 10 people. Keeping the production lean is what allowed us to shoot all over New Orleans on Magazine Street, in Parkway Poboys (mine and Elton’s favorite), and the artist Simon’s studio and shop for an overnight. We shot on a Panasonic Varicam (for the dual ISO and low light ability) and an Panavision zoom lens. Our camera package came from Panavision New Orleans from a $15k grant I won with a Jury Prize at the 2019 New Orleans Film Festival for my first feature THE LONG SHADOW. 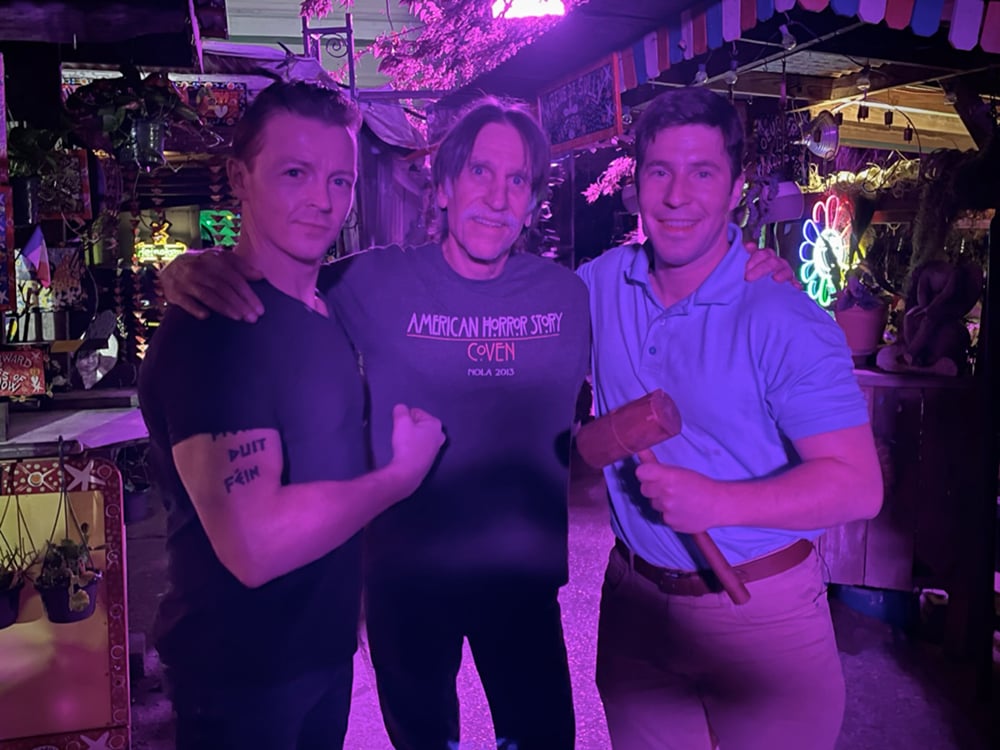 Soundstripe: Coming from New Orleans, which is a film hub but still outside the main hotbeds of LA and NY, how have you been able to develop your own career and creative core?

Lafrentz: Although New Orleans is very established as a production hub there’s still a lot of goodwill towards indie filmmakers, especially when they’re trying to represent the city and the community in a positive way. I came up working in the AD department on films shooting in Louisiana and made it my business to understand the needs of every other job. People really respond to respect for their craft, so when it came time to make my own work lots of those same people did, and continue to, show up for me. When I’m directing, part of the reason I prep so obsessively is because I’m trying to honor their work by making something we can be proud of so all the blood, sweat, tears, and time away from family are worth it. That ethos has served me well. So far, I’ve done three shorts and a feature in Louisiana and don’t plan on stopping any time soon.

Soundstripe: Tell us about the casting process for your project and how you were able to get such a diverse cast of both local and LA talent involved?

Lafrentz: I worked with an up-and-coming New Orleans Casting Director named Hunter McHugh, CSA who, with his faithful assistant, read and auditioned 100+ actors for my five roles. It was an embarrassment of riches for a small project like SAINT CITY. After that, my process is to get the actors believing in my vision for the story and developing the characters with them further. I see the characters as written as a jumping off point so the actors can bring their own ideas to them and we can create something greater than the sum of its parts. Allowing space for their creativity gives them authorship over their roles and the ability to connect to the character in a much stronger way than if I’m just dictating ideas.

I asked Phil Biedron (Elton Jennings) and Jacob Rainer (Ray Jennings), who play father and son, to get together over Zoom without me so that they could talk and share some ideas and personal knowledge that only they would know about. Together, they came up with a really sweet sign-off to their FaceTime in the film that was completely their own creation. Kim Collins (Dino) and I talked extensively about Dino’s backstory as a homeless man. The result of those conversations was me letting go of an idea about the character that had existed since the first draft but ultimately realizing what Dino’s arc in the film actually is in a much more cathartic way.

Brian Gilleece (Brad) wrote an in character stream of consciousness monologue that he shared with me. I used his ideas as the basis of his final monologue in the film and to refine some areas earlier in the script to give his character more presence throughout, since he speaks so little. Annie Gaia (Nina) was a hero who came off the bench a day before shooting when Hunter (Casting Director) called her after another actress dropped out last minute. Annie’s empathy, actor’s instincts, and investigative mind helped us both ground Nina’s character in a passionate desire for justice which, if you think about it, makes her the most hard-boiled character in this PI story.

Soundstripe: Tell us a little bit about the editing process for Saint City, what NLE did your team use? And how did you approach music and soundtrack?

Lafrentz: My editor, Noel Diaz de Rivera, and I worked on SAINT CITY in Adobe Premiere. He and I were undergraduates in the UCLA film program together and have worked on commercial and trailer projects together ever since, but this was our first narrative project together. He’s in LA while I live in New Orleans so he would send a cut, I’d do notes in Frame.io, and repeat, repeat, repeat. I am NOT a fan of remote editing. In my mind, there’s no substitute for being in the room together reviewing, tweaking, talking, and problem solving. We probably would have saved two or three months in post if we could have done that. All that being said, I love where we arrived with the final edit. It’s the leanest, sharpest, most efficient version of itself and I can stand behind every cut in the film. I guess we took the long way to what was ultimately the right destination. 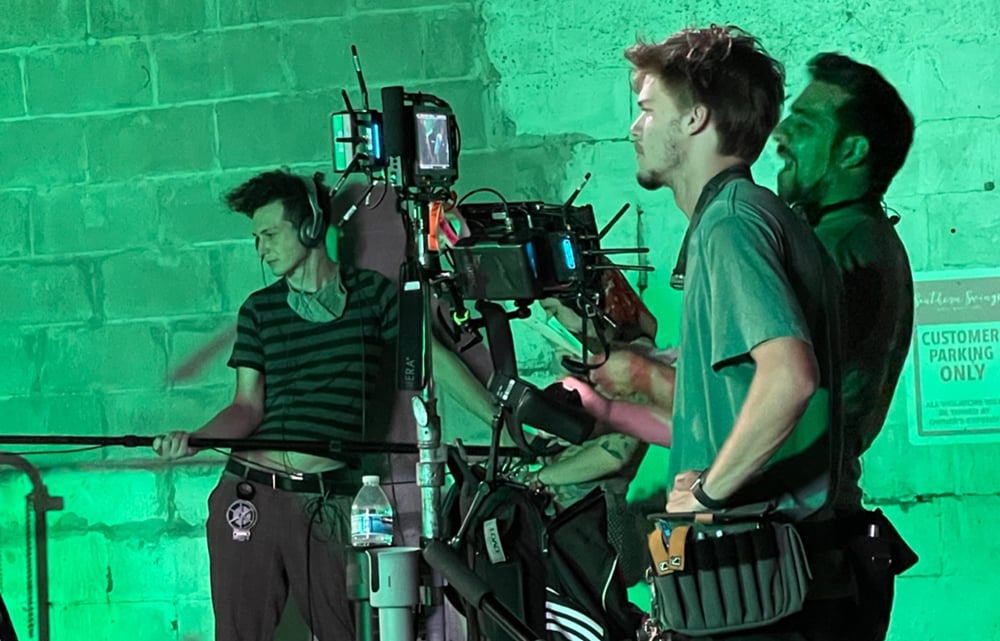 Soundstripe: For anyone starting out on their own film journey looking to break into film and/or television, what advice would you give them?

Lafrentz: For anyone starting out, the advice I’d give is: whatever you’re thinking about making: go make it. The first few times you make a short film everything feels so precious and sacred but the more times you go through the process of killing your darlings, the easier it gets to see your own work and creative choices with a critical eye. That being said, when starting out, do your best to manage the scope of your project. You’re going to need collaborators and being conscientious of their time and skills, especially when you can’t pay much (or anything), is very important. I guess the short version is: fail early and often, but limit yours, and other's, exposure.

For more filmmaking advice and insightful interviews, check out these additional articles from the Soundstripe blog: