“Cinematic” is probably my favorite of these terms. In some senses, it means absolutely nothing besides “this image looks pretty.” However, in other terms, it’s an important qualifier that distinguishes a high-end, job-specific video camera from the smartphone in your friend’s pocket.

So, for those who might be doing their research into which camera is right for their video needs, or perhaps those looking to see how their current camera compares to the competition, let’s quickly outline our picks for the actual best cinema camera currently on the market:

But, before we dive into each of these selections a bit more in-depth, let’s go over some basics first.

What makes a camera a cinema camera?

Now, this is a big question to answer in a short article which is supposed to be about camera options. Still, without going too in-depth on the specifics, we do need to clarify a few things which separate a cinema camera from your friend’s smartphone camera.

A cinema camera is any type of digital video camera that (more or less) has the following elements:

Now, please take this with a grain of salt as many of the elements included (or not included) may be debatable to different filmmakers or cinematographers. But in general, these are the basic features which every cinema camera should have.

Image Quality and Other Factors to Consider

The real crux of what you should consider for your cinema camera (as well as what might qualify as a cinema camera) really comes down to the image quality and other factors you might need to create cinematic footage.

There’s a real debate within the film and video world whether or not a smartphone can shoot “cinematic” footage. By some definitions, there have already been numerous feature films shot on iPhones or the like.

However, there’s also plenty to be said about the limitations of working with a non-cinema camera on a project where you can’t shoot 4K or with a high dynamic range to really capture the colors and looks many filmmakers might desire.

As such, for our list below we will be providing any aspiring filmmakers with the seven best selections that we could come up with for going out and shooting high-quality cinematic footage.

These are real bona-fide cinema cameras which represent the best investments for any serious video professionals, companies, or agencies looking to provide the best footage possible. 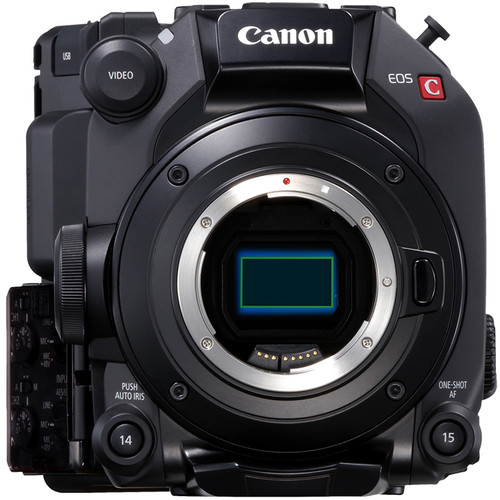 Our first selection is the Canon C300 Mark III as one of the best tried-and-true cinema cameras on the market. Taking a step up from the Mark II version, the current Canon camera is perhaps the best video camera when it comes to either shooting high-quality footage that looks great in a studio or run-and-gun documentary shooting handheld in low light situations.

With a Super 35mm sensor capable of 4K video at up to 120 fps, you’ll have plenty of DCI 4K to use, which is recorded directly to your CFexpress card (and with two slots).

The 16-stops of high dynamic range really set this cinema camera body apart from your other mirrorless cameras or DSLR offerings, as its beautiful image quality combines well with all of its practical bells-and-whistles for professional video production. (And it's truly a great cine camera to invest in to level up your Canon mirrorless camera.) 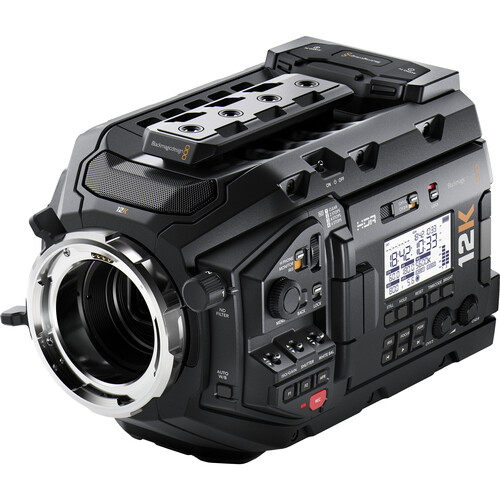 That being said, the Blackmagic URSA Mini Pro 12K might be the current best of the bunch with its insane video recording capabilities and low light performance. It can certainly broadcast as well, but the Mini Pro 12K is simply one of the best options for all your commercial shoots, corporate videos, and even indie shorts or features.

With a 12K Super35 sensor, 14 stops of dynamic range, and some beautiful new Blackmagic color science, you can rest assured that your footage is going to look absolutely stunning and comparable to any camera currently in existence.

With a 4K 10.2MP CMOS full-frame sensor capable of recording DCI 4K at up to 60 fps (and UHD 4K at up to 120fps), the FX6 has become a real workhorse in the industry for professionals of any ilk.

The 15+ stops of dynamic range also don’t hurt, as Sony’s FX6 is quickly becoming a go-to camera for all types of projects — not just in the studio, but also out on low light locations or in the field. It’s also surprisingly compact and lightweight compared to some others on the list, so feel free to grab this one and go with little worry about where it might fit into your workflow. 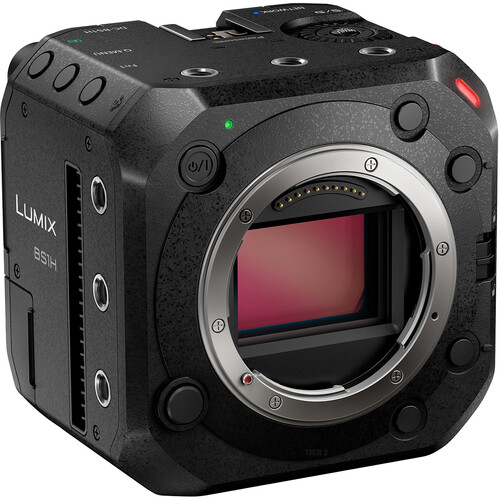 One of the “cheapest” options on our list that still satisfies our basic tenets of what makes a cinema camera actually a cinema camera, the Panasonic Lumix BS1H is a behemoth. Designed as a “box camera,” the BS1H is really meant to be modular and tailored for your individual production needs as it can be built up as big (or as small) as you want.

It also has a very powerful 24.2MP full-frame MOS sensor capable of up to 5.9K H.264 video recording, plus plenty of dynamic range (14+ stops), dual-native ISO, and some beautiful V-Log recording. It’s a bit newer to the group, but with a price under $3,500 it might be the easiest upgrade from your current mirrorless cameras options. 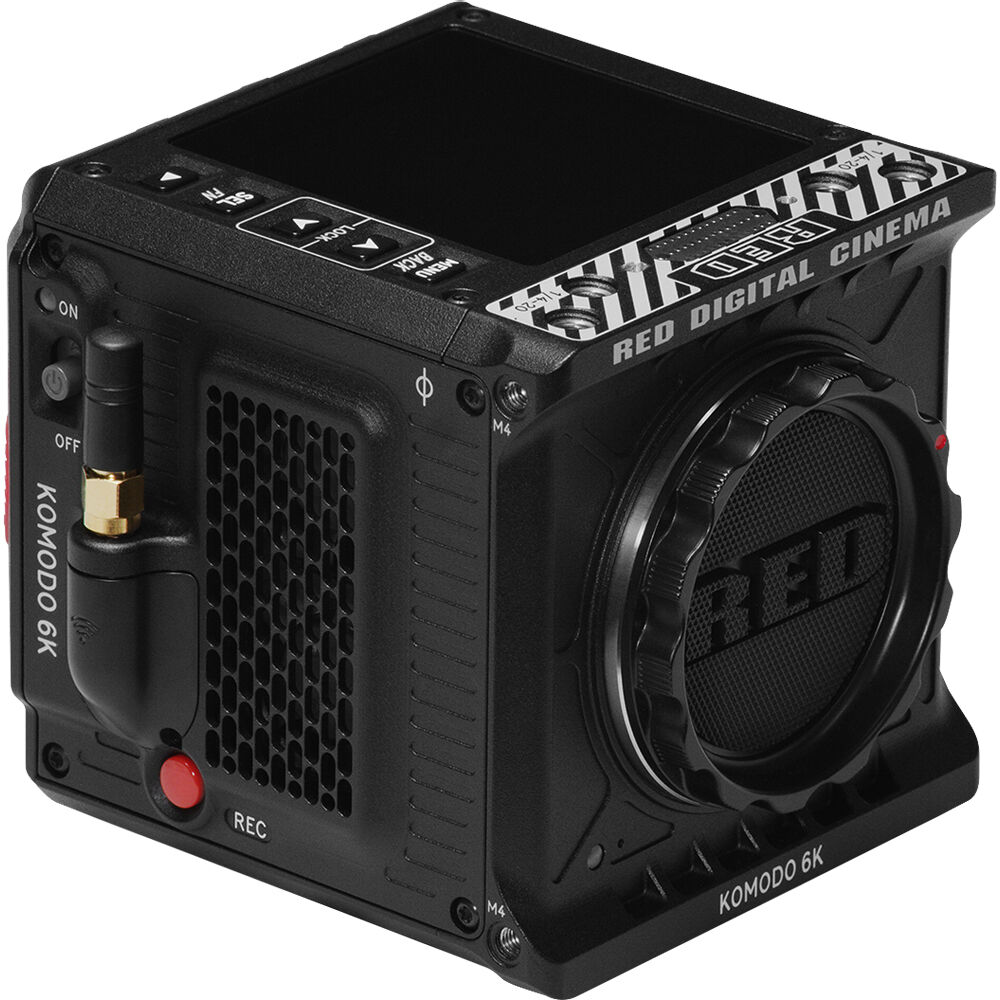 We’d be sorely remiss if we put together a “best cinema camera” list and didn’t include at least one RED camera to choose from. Long known for their industry-breaking cinema cameras and their loyal fanbase of video shooters, the RED KOMODO 6K might actually be their most accessible camera for those who haven’t drank the RED Kool Aid yet.

With a 19.9MP Super35 CMOS sensor with Global Shutter technology, a whopping 16+ stops of dynamic range for low light performance, and the ability to record up to 6K at 40 fps (plus 4K at 60 fps), the KOMODO 6K is a beautiful concoction of all things that make RED cameras great. 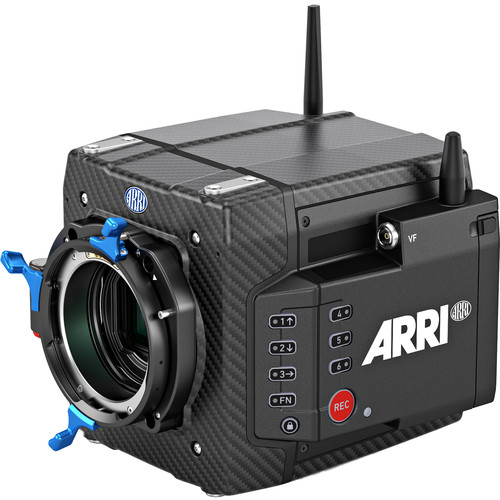 When most filmmakers and professional videographers talk about cinema cameras, there are usually two levels to consider. The cameras we’ve listed above would fall into the “over-the-counter” (and under $6,000 range) options, which are sort of hybrids that  share several similarities with your run-of-the-mill digital cameras.

The next tier is usually associated with cameras like the ARRI cameras (as well as REDs and others) which, in most instances, you can only get your hands on by renting from a production house.

The ARRI ALEXA Mini LF is one of these upper echelon cameras that, while more exclusive, is about as accessible as a camera at this tier can be. With a large-format 4448 x 3096 sensor capable of recording native 4K video in ARRIRAW and ProRes, the ARRI ALEXA Mini LF will absolutely blow many of these other cameras out of the water.

You should know that the price jumps up quite a bit from the previous cameras on this list. However, the ARRI ALEXA Mini LF has been used to shoot many of the biggest films of our day like The Power of the Dog or Dune: Part One.

Along with the ARRI ALEXA Mini LF, we also have to include another highest-end cinema camera on our list for those who are dead serious about producing content at the best clip possible. The Sony VENICE 2 is another 8K behemoth that boasts 4K ProRes video with 4444/422HQ internal raw recording.

16 stops of dynamic range, 8.6K footage at 30 fps, and some very versatile dual-range based ISO at 800/32000 mean this camera is indeed one of the best options for any video production project under the sun.

However, as with any ARRI camera or other higher-end options, your best bet for working with the VENICE 2 would be to rent it on a project-by-project basis. And make sure you (or your DP) really know what they're doing to get the most out of this cinema camera.

Those are our picks for the best cinema camera currently on the market. If these cameras are in the right price range and boast the right specs for your needs, then hopefully we’ve helped you on your journey to pick the right camera for you.

However, if you’re looking for other camera options at other price points, or simply want to spend some more time developing your cinematography craft, check out these other guides and resources below: