What Is a Gaffer in Film Production? 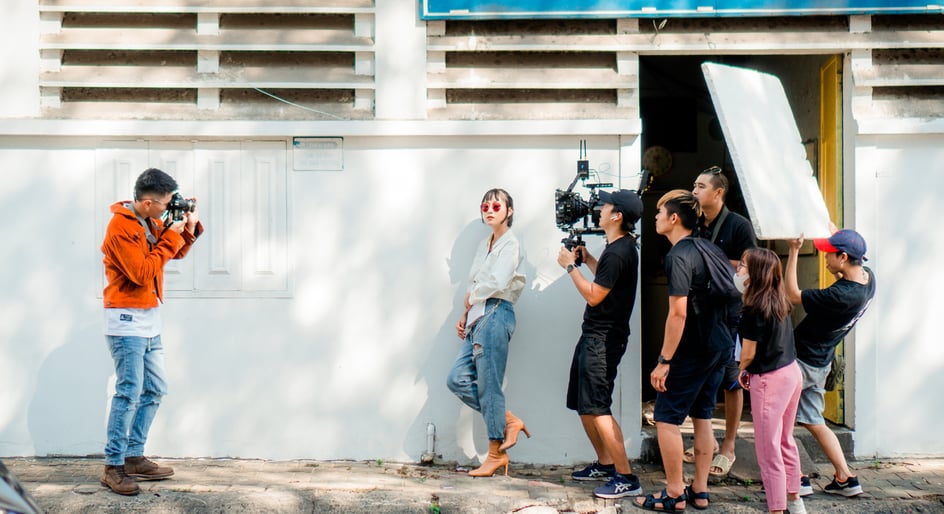 When starting off in film and video, there can be a lot of confusing terms and titles to learn. For example: What is a “gaffer”? And who the heck is the “best boy” on a set?

While some of these names make sense in terms of their roles and uses, others are just odd holdovers from the bygone days of early cinema. Yet, aside from the oddness of the name, a gaffer is actually a very important person on any film or video set.

We’ll get into all the definitions, details, and hierarchy of the role below, but in short, a gaffer is in charge of lighting equipment and electrical equipment in film production.

Again, maybe not the first jobs that come to mind when you hear that title. But once you understand how a set is constructed (and the importance of electricity and video lighting), you’ll realize that the gaffer is truly one of the most important roles on any production set.

What is a gaffer?

So, in the most basic terms possible, let’s try to define the role of a gaffer. In film and video, a gaffer is officially the head of the lighting and power department and is usually responsible for the setting up, handling, and powering of all of the lighting needed for a production.

In reality, the gaffer is a loose but important role that can be different from set to set. In general, a gaffer is high up the chain of command as they wield a great deal of power and responsibility in the electrical department. You could say that they literally keep the lights on.

There are different rumors and folklore about the origins of the gaffer name on most film sets (the most popular one comes from the old term for a "hooked metal pole").

According to Merriam Webster, the name “gaffer” actually predates Edison’s invention of electrical equipment and the light bulb itself. The word comes from old English origins and is a phonetic reduction of the word “godfather.”

However, while the film gaffer’s job description might be the fun “old man on set,” the role has also been referred to as the more modernized “chief lighting technician.”

While you’ll obviously still see both titles on set or in the credits of your favorite films, they are pretty much interchangeable at this point with one being a more direct and understood title.

Regardless, the gaffer or chief lighting technician is needed to run the lighting department and a lighting crew. They are usually brought in very early in a production’s development to assist the director and the cinematographer in working on lighting plans, electrical knowledge, and any other elements of production which might require power or light.

The roles of a lighting crew

So, what is this lighting crew and where does a gaffer or chief lighting technician fit into its hierarchy? Let’s take a look at one of the most important departments on any film set, as they’re responsible for both lighting and powering all of the scenes.

Here’s an outline of the usual hierarchy in a lighting crew:

As you can see, the gaffer is a very important person on the film set and is an integral part of the overall planning and production process, as well as a person who often needs to delegate and manage many different roles across a comprehensive team.

While we’ve combined the two crews into one department in our hierarchy chart, we also need to talk a bit about the difference between lighting equipment and electrical equipment and their two different, but obviously overlapping, departments.

As you might expect, a film set requires a lot of power. Even your small budget indie films or corporate videos sometimes require dozens of lights and other powered devices. And when you start looking at big budget feature films and television shows, there’s sometimes the need for enough power to light up a small town.

And while there are other devices on film sets that need power (like cameras, coolers, practical effects, etc.), the number one source for most of the power needs is often the lighting department.

As such, these lighting technicians and electrical department crews need a chief electrician manager who oversees both, which is often this gaffer or chief lighting technician role. But that’s not always the case. In some film industry instances there will be electrical equipment managers that supersede the gaffer based on power demands.

However, for most instances (and for forming a solid understanding of traditional film set hierarchy), the gaffer will oversee both areas and should be your person in charge of managing those departments.

These definitions and breakdowns might seem like something from a film school lecture, but hopefully they gave you a solid understanding of what a gaffer is, what their role on set is, and where they fit into a crew’s hierarchy.

However, if you want to handle this role or simply learn more about lighting in regards to film and video production, be sure to check out these additional resources from the Soundstripe blog: