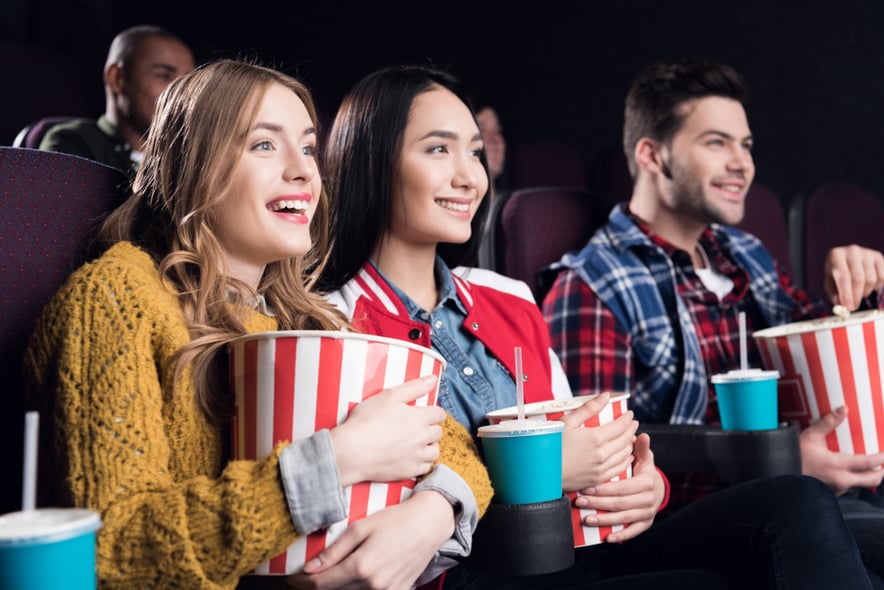 You’ve been waiting to watch this movie ever since it was announced last year. You bought your tickets online as soon as they became available and showed up to the theater early. Now, after the endless previews, the lights in the theater dim and the opening chords of music trickle over the speakers. You’ve got goosebumps! Every filmmaker knows there’s something powerful about music for film. It’s why the iconic da-dum, da-dum from Jaws can still make your heart rate jump or why the Star Wars theme can send you tumbling back in time to your childhood. Why does great music in film affect audiences so deeply? What’s actually happening in the viewer’s brain? More importantly, how can you, the filmmaker, use this knowledge to craft the perfect soundtrack for your next masterpiece?

Your Brain on Music

Music does something to the brain. That’s obvious enough. It’s how you suddenly find yourself wailing out Cindy Lauper’s “Time After Time” at the top of your lungs when it pops up on the radio. It’s why there’s nothing better than slipping off your shoes after a long day of work and turning on your favorite playlist. It’s why Cake’s “The Distance” can push you just a little faster in your workout or how Eric Clapton’s “Tears in Heaven,” can make the world go bendy as you wipe your eyes (dust particles, of course).

But what is that something that music does to the human brain? Fortunately, there is no shortage of college students willing to lie in an MRI machine and listen to music for long periods of time in exchange for pizza money.

Daniel Abrams of Stanford University shoved numerous participants into MRI machines and discovered that music activated parts of the brain involved in “movement, planning, attention, and memory.” That explains why you still know every single lyric to Don McLean’s “American Pie”!

That’s not all music does in the human brain. Neuroscientist Valorie Salimpoor discovered that music stimulates the release of dopamine in the brain. You may have heard dopamine called “the feel-good hormone.” It tends to show up when humans are doing things that cause pleasure, like gambling, eating, and enjoying some quality time in the bedroom.

So, music is as good as sex?

Not exactly, but it definitely arouses the brain. What these studies show is that music can grab our attention and pluck our emotional chords like a violin. No wonder music for filmmakers can be an incredible tool! How can filmmakers use the powerful psychological effects of music to make their movies even better?

How to Use Music for Films

Composer Neil Brand explains the magic and beauty of sitting down to watch a movie: “The darkness, the strangers, the anticipation, the warm comfortable embrace of the cinema seat. We’re ready to experience some big emotions, and the minute the music booms out, we are on board for the ride.”

How can you as a filmmaker use music to take your viewers on a ride that they will never forget? (Speaking of rides that you’ll never forget, is anyone else channeling the main theme from Jurassic Park right now?)

Here are just some of the ways music can improve and enhance key aspects of your movie:

Music can help establish the setting of your movie, giving a tangible feeling to the location of a scene and the emotions at play. Horror movies are especially good at this trick, playing soft, creepy music as the protagonist stumbles into a graveyard or enters a haunted house. Music can build setting in almost any type of movie. For example, the highly synthesized soundtrack of Blade Runner helped establish the cheap, urban wasteland that the hero, Rick Deckard, inhabited.

The musical score of a movie can go a long way toward hinting that a character is a bad guy, enhancing the heroic moment a protagonist makes a difficult choice, or helping the viewer understand the gravity of a particular situation. In this way, the music can operate as a narrative lens for the viewer, guiding them through the story and alerting them to the different emotional pulls of each character, action, and choice.

Perhaps no one does this better than John Williams. Not only does his Jaws soundtrack tell us exactly how menacing and fearful a shark can be, but his Star Wars soundtrack is a masterclass in defining a character’s primary qualities through music. If you hear Darth Vader’s powerful theme song and don’t immediately understand that he’s one bad dude, then you’ve got the movie on mute!

The right music at just the right moment can dramatically enhance the emotional impact of a scene. Think of the powerful melody that accompanies Scarlet in Gone with the Wind when she vows that she will never go hungry again! The scene was already big and beautiful in its own right, but the music makes you feel her desperation, her defiance, and her fire all bursting from the screen. The right music can wrench your guts when the hero loses his best friend or make your heart climb when he saves the day. It can even make you start to blush when the girl gets her man at the end.

Of course, it can be easy to overuse music, especially in a movie’s biggest moments. Filmmakers need to be wary of over-relying on music to tell viewers how to feel. Think of music as a way to gently guide viewers to a certain emotional conclusion, rather than dragging them by the hair.

Music can help characterize more than just a movie’s physical setting. It can also bring a culture to light or showcase the social mores of a group. The ferocious beating drums in the Black Panther soundtrack invites viewers into the secret country of Wakanda where African heritage meets impressive scientific advancement. It is impossible to watch that movie without feeling those drumbeats in your blood, especially as T’Challa fights for the leadership of his people.

A musical score can also be used to tie together aspects of a movie. It can bind scenes together, but also feelings, characters, and emotions. John Williams does this brilliantly in Star Wars, using one of the primary musical themes of the movie to express Luke Skywalker’s awakening as a Jedi. Throughout the original three movies, whenever Luke makes a new internal discovery or overcomes an obstacle on his path to embracing the Force, viewers will hear that special melody again.

How to Use What You’ve Learned About Music for Film

What have we learned so far? Music lights up the memory and emotional centers of the brain like a Christmas tree and can lead to the release of the brain’s special happy juice called dopamine. Filmmakers can use the power of music to enhance the atmosphere of their scenes, guide viewers through the emotional highs and lows of the story, make the emotional punches more potent, articulate a geographical or social setting, and connect important themes throughout the movie.

That’s all well and good, but how can filmmakers actually do this? Ryan Connolly, a popular filmmaker and host of the YouTube channel “Film Riot,” has some useful suggestions. He explains that he starts thinking about the soundtrack for his films at the very beginning of the project. Music isn’t just an afterthought, it’s a key component that he builds right into the DNA of the story. Connolly also mentions that he creates a playlist of music related to his movie and listens to it obsessively as he works through the project. This keeps him in the right emotional space and helps him further connect the music to the final outcome of the movie. Check out his entire video about how up-and-coming filmmakers can use the psychology of music in their films. (Warning – the first four minutes of the video are dedicated to a skit that, upon first viewing, don’t seem to have anything to do with music.)

Do you have a new movie project in mind? Perhaps a story has been tickling in the back of your brain for weeks, months, or even years? Or maybe you're itching to start a YouTube channel and experiment with different project genres, like documentaries or workout videos.

Before you boot up your screenwriting software, start thinking about what role music will play in your movie. Sure, you don’t have a Steven Spielberg budget so you can’t hire John Williams to score your film, but there are plenty of places where you can find music for filmmakers.

One of those places is Soundstripe. At Soundstripe, we offer royalty free music for film. Our music library includes a wide variety of genres, and our selection is continually growing. You can also search and filter our music based on a number of criteria. Filmmakers appreciate that they can find songs based on mood, pace, length, and beats. You can also create playlists for your favorite songs. Then you can be like Ryan Connolly and listen to your chosen movie soundtrack as you write your screenplay, watch the first takes, and start the arduous film editing process.

Best of all, for an all-inclusive subscription, you can access and use all of the royalty free songs in our library. You don’t have to worry about permissions or copyrights, only about creating the absolute best soundtrack for your movie. Take a look at our royalty free music for film and then sign up for a Soundstripe membership today.