Learn How to Edit a SXSW Feature with Filmmaker Pete Ohs

There’s a line from The Simpsons that I think about a lot in regards to filmmaking. Mr. Burns and Homer are relaxing together in a cabin after climbing a mountain, and Mr. Burns professes his love for sitting in the most elegant way ever expressed.

"Oh, yes, sitting. The great leveler. From the mightiest Pharaoh to the lowliest peasant, who doesn't enjoy a good sit?"

I like it as a quote because it really breaks down how we all share the same enjoyment from some of the most basic human functions…and I often think about it when it comes to the filmmaking task of editing.

Because no matter if you're Steven Speilberg or Joe Schmoe (not a Simpsons character), we all have to sit down and start an edit with the same blank slate, the same NLE program, and the same editing chair. Like Mr. Burns said, sitting is the great leveler.

That’s why it was a delight to sit down with filmmaker Pete Ohs to discuss how he edited his SXSW Feature film Jethica (a suspenseful comedy drama) using the same tools and much of the same creative processes as you or I would.

During our discussion, Ohs also revealed he made the bold decision to Twitch stream his entire editing process from start to finish. So, before you take on your next editing project, let’s go through some first-hand advice on how this talented writer, director, and editor was able to bring his project to life.

Soundstripe: Thanks for sitting down with us, Pete! First and foremost, let’s start by simply asking which video editing software did you use to edit your SXSW Feature Jethica — and why? 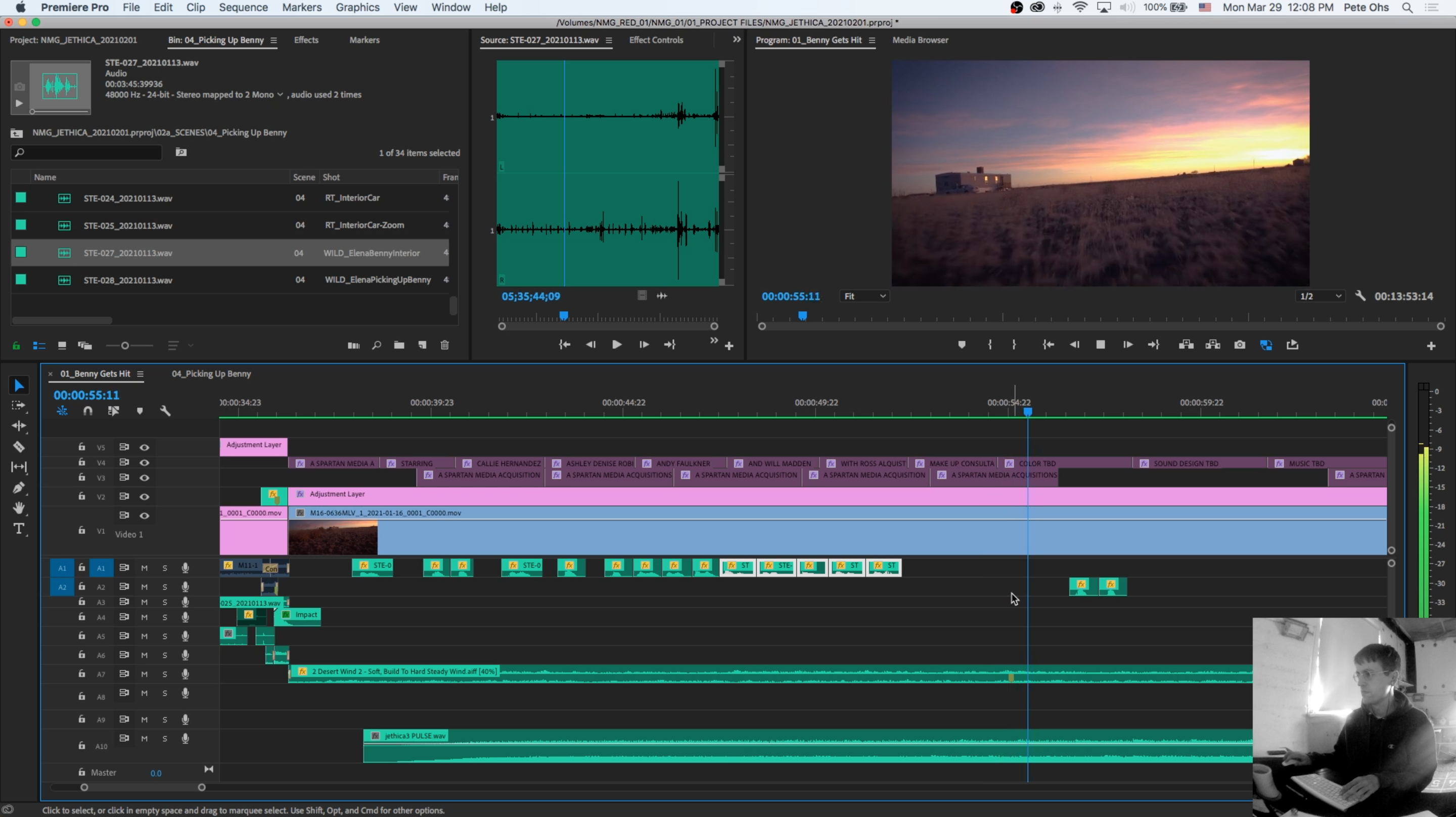 Pete Ohs: So I edited Jethica in Premiere Pro, but man, it’s been a journey. When I first started editing in high school I was using iMovie, but then in college I started using Final Cut Pro 7, and then after college I got a job at a television production company and we edited in Avid Media Composer.

But for a while I would still always use Final Cut 7 for my side projects when I’d do music videos because, for whatever reason, the program was just more creatively intuitive for me than Avid, which was all about cutting fast. Final Cut had these small nuances for how you navigated footage and stuff that I felt was a little more intuitive.

However, once they stopped doing FInal Cut 7, I moved to Premiere Pro which pretty much just picked up where FCP7 left off. So, it was a really seamless transition into making Premiere Pro my go-to editing software. Also, pretty much all of the nonlinear editor programs are basically doing the same things these days, so I try to not get hung up on it.

Plus, it’s cool that Premiere Pro syncs up with the rest of the Creative Cloud, so if I’m off doing things in Photoshop or InDesign it’s kind of nice that it’s all packaged together and you don’t have to think about moving things around.

SS: As we mentioned in our Cameras of SXSW 2022 roundup, you shot Jethica on a Canon 5D mk III using the Magic Lantern hack to record RAW. Picking up from there, could you take us through your process for getting your footage into Premiere Pro and into the actual edit that we get to watch via your Twitch videos?

PO: Sure, so once we were done shooting everyday I would take out the CF card, plug it into my CF card reader, plug it into the laptop, and copy all of that day’s footage onto one of my external hard drives.

And then, because I was using the Magic Lantern hack which records in MLV files, I would have to use this little program to essentially unpack the files and save them in a folder of DNGs so it would function as a regular CinemaDNG file.

Which I know was a funky little step that was unique for our workflow, but basically from there I’d take all of the folders and back them up on another hard drive, at which point I’d considered everything backed up and I could resume shooting the next day.

From there it was just a normal process, really the way you’d work with any CinemaDNG RAW video where I’d create proxies which I’d edit with in Premiere before eventually sending everything back through DaVinci for color to finish.

It’s good to include because we don’t actually see any of this process in the Twitch streams, so if you’re watching the videos you’ll see that I’m working with proxies. But before I dove in I already had all of the backups, the assets, and the footage ready to go, so you’re really just watching my actual editing process unfold.

SS: Speaking of the Twitch stream, can you take us through your decision to broadcast your entire video editing process? 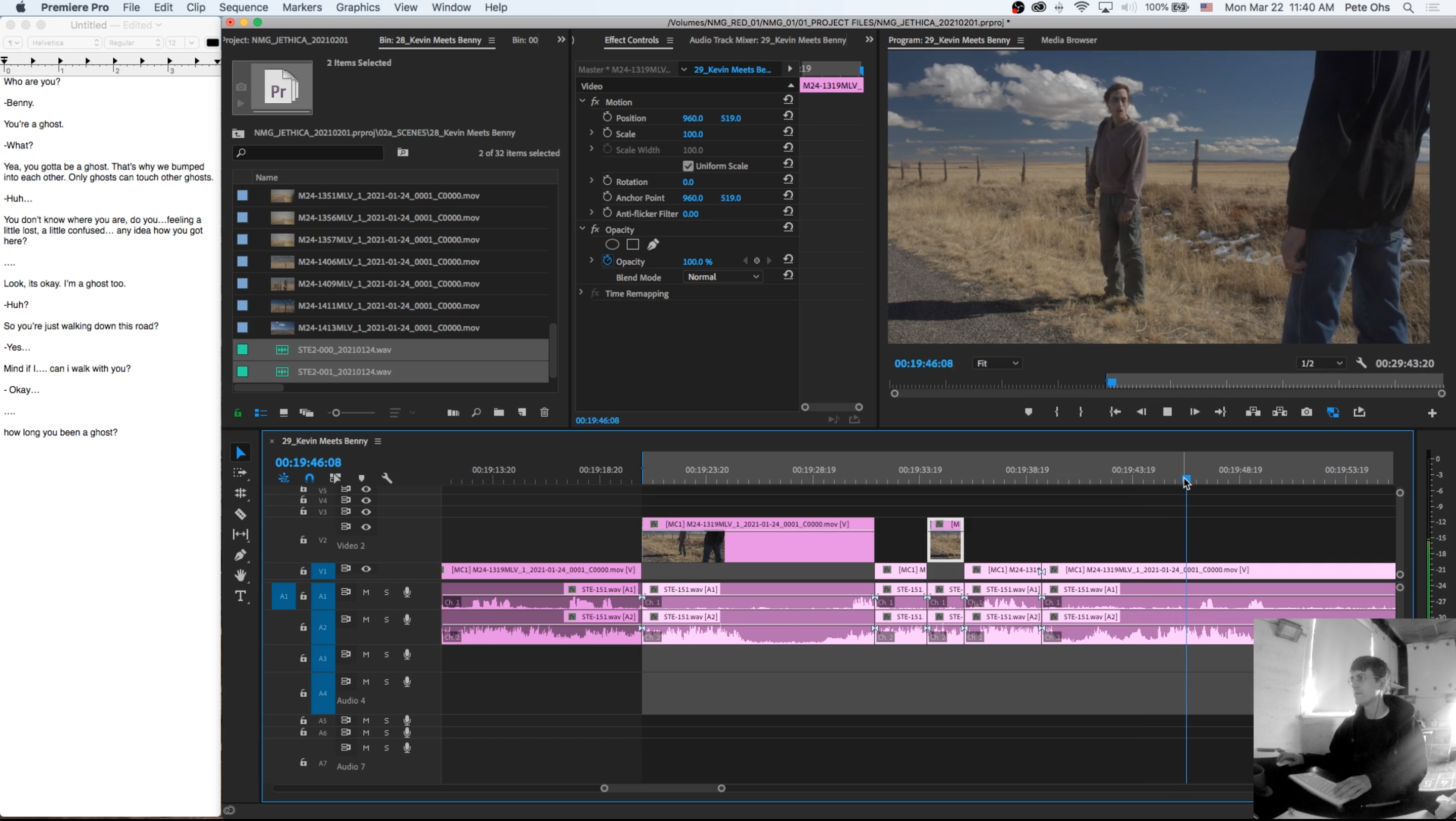 PO: I’ve always found the post-production part of making a film to be very solitary. It’s these several months to a year in which you just kind of disappear and you’re alone, which is kind of nice, but also feels like a missed opportunity. I’m always looking for ways to experiment, to try things differently. And so I was like, what else could I do in this process?

I had also been doing other editing during the pandemic where I’m working remotely and I have a director or producer sharing my screen with them just watching me edit and having me show them cuts, so I was aware that the technology was out there to do something like this.

So then one day I have the thought, what if I streamed my edit? And thought, sure, basically nobody wants to watch that, but the 17-year-old version of myself would absolutely have loved to watch Paul Thomas Anderson editing Boogie Nights. He would have watched that endlessly, you know?

I also grew up in Ohio and didn’t have any industry connections, let alone anyone with a career in the arts. So I’m aware that being able to look into an edit bay and see what it looks like for someone to be cutting something like this together, while maybe kind of boring to some, is actually kind of cool for those who might have no idea of what something like this looks like. I like the idea of demystifying these types of things.

SS: Elaborating on that, what is your actual editing process that we can see in action in your Twitch videos?

PO: So, to start, every scene gets a folder. And in each folder goes the footage. Then I’ll create a sequence for that scene. I just do it in order. Why not? And I drag all of the footage from a scene into that sequence.

From there I start to pull selects and begin color coding each set up so I have a clear quick visual of what I’m working with. And then I make cuts and move the selects up to V2 or V3 based on how good they are. Maybe there’s even like a V4 if something is super special. I then take all those selects and move them to the front of the timeline and leave all the raw footage at the end.

And then I build the first assembly of the scene in that sequence and I repeat that process for each scene. So let’s say if there are 40 scenes altogether, once I've gotten through all the scenes I’ll have 40 sequences with a first pass through each. And that’s where you start.

The Twitch stream essentially ends after a pretty solid rough cut of the movie. There really wasn’t much exploration after that first assembly, so what you see in the Twitch stream is pretty much the movie from beginning to end.

The only stuff you really miss after the Twitch stream ends is where I sent everything over to our sound designer Danny Madden, which was literally me just giving him a hard drive with all the project files and media. He just opened it in Premiere and did a pass on sound design then gave the hard drive back.

We also got the color grade done in DaVinci by a post-production house in Warsaw because I received an award from a film festival in Poland and they did an amazing job. But besides that everything was in Premiere.

SS: You mentioned during the film’s premiere here at SXSW that the film’s score was also done live via Twitch steam as well. Can you take us through this collaborative process? 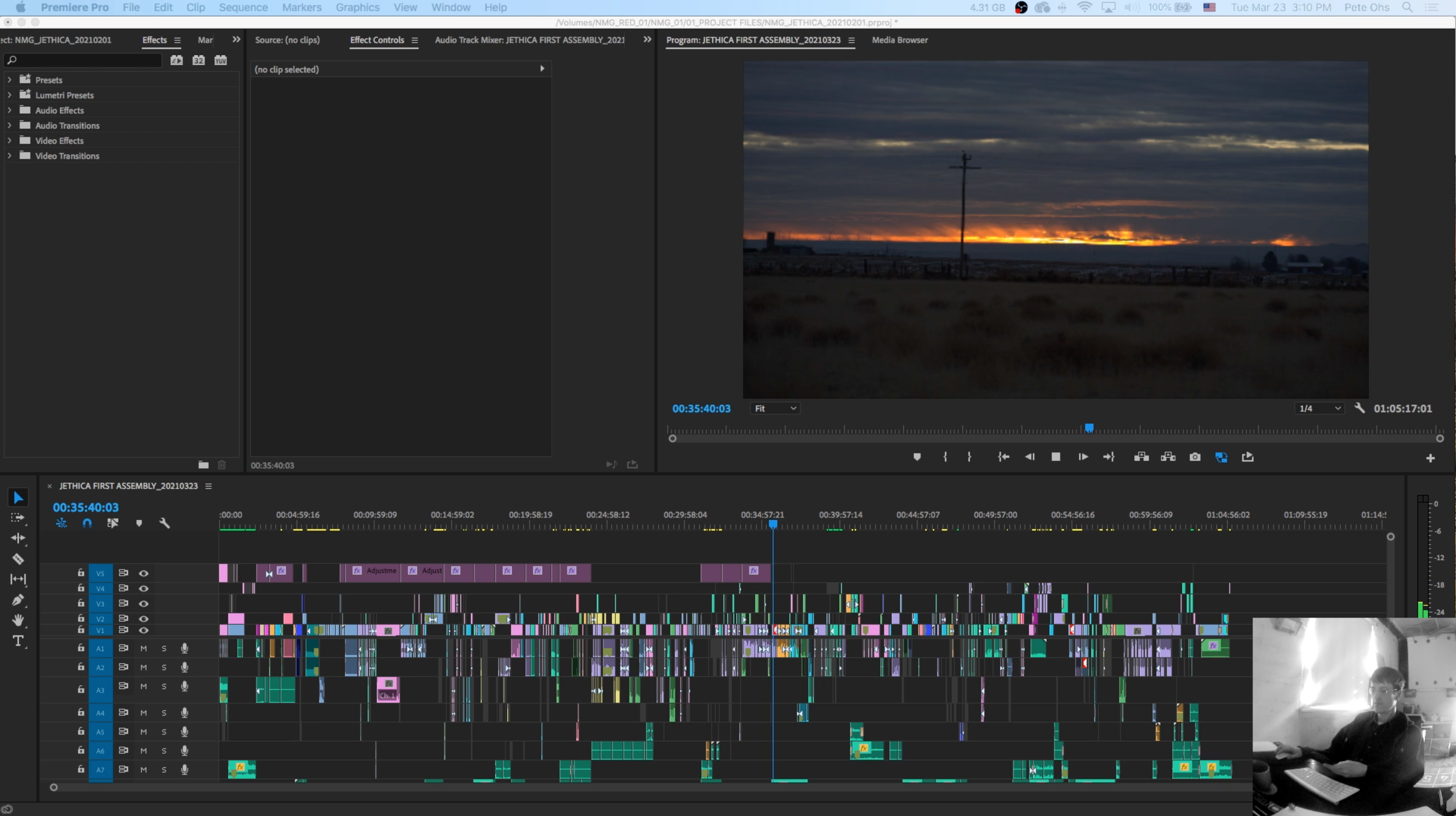 PO: Yeah, so John Bowers is a friend of mine and we work together and he makes music as well. When I started doing the live edit of the movie he saw me doing it and texted to say, “Hey I’m making some music, what if I streamed my music on Twitch and you piped my stream into your stream and I can essentially live score the process?”

I thought that just sounded fun and cool because essentially we were hanging out and it almost felt like we were jamming. You know, like a band being in a room playing different instruments with your friends and riffing off each other.

So, while he was making music I was assembling scenes and at the end he sent me a couple of hours of music with some of his favorite vibes from the stream and that became the film’s score. So, that’s how it got scored while it was being edited.

SS: That’s awesome. It’s definitely a unique approach to the process! Wrapping up, what general advice would you give for anyone — ideally those with the goal of making something that could play in a festival like SXSW — who is looking to edit their own feature films?

And it’s up to you to figure out what the connection is, whether it’s a similar color or it's a spatial thing or there’s a movement or sound that helps to connect it. The more connections the better, and the better the film is going to feel.

I’d also just generally say that it’s a good idea to start establishing rules for yourself early on. Build out your own internal logic for why you’re making the decisions that you’re making. These don’t have to be other people’s rules, you can make them up.

But it’s good to have your own understanding of why you’re making your different directing and editing decisions. So if someone were to ask you why you made a certain decision or made a specific cut you’d have an answer. There’s no wrong answers, it’s just important that you have one.

If you’d like to find out more about Jethica and filmmaker Pete Ohs, you can start by visiting his website. You can also watch along with the entirety of his editing process by checking out the videos in order on his Twitch channel, EditBay4.

For more editing advice and filmmaking insights, check out these additional articles from the Soundstripe blog:

How Do Filmmakers Traditionally Find Music Without a Site Like Soundstripe?

How to Use Match Cuts in Film and Video Editing

The Basics of Film Editing (and How to Edit a Movie)