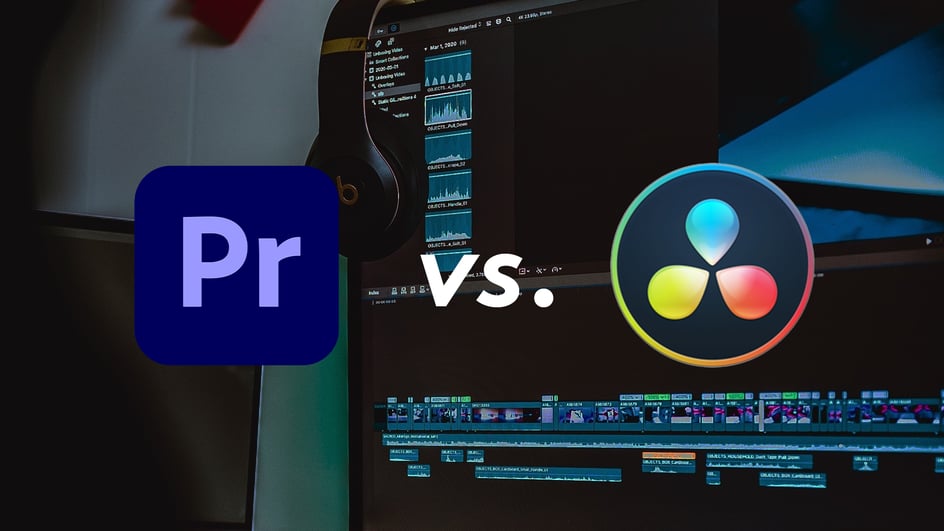 Every successful filmmaker has some combination of creative vision and technical talent. But without the right tools and resources, all of that talent and gear knowledge goes to waste.

Editing is an essential component of video production, where you transform camera footage into something that pulls at a viewer’s emotions or inspires them to do something.

You already know that part of filmmaking is investing in camera gear. It’s an almost instinctive thing because we never have the budget to buy everything we want, which often means we feel limited in what we’re able to  produce.

But finding the right software is just as important to helping you bring your vision to life. It will only enhance and elevate the final product you create, which puts extra weight on the value of choosing the tools that work best for your projects.

When creators talk about video editing software, two names that get a lot of attention are Adobe’s Premiere Pro and Blackmagic’s DaVinci Resolve.

These two programs are relied on by Hollywood filmmakers, content creators, video marketers, wedding filmmakers, and new hobbyists alike. The blend of accessibility with powerful tools make both options ideal for anyone.

And as a result, they’re the two tools that most people consider when they decide to start editing footage and sharing professional-level videos.

Both Adobe and Blackmagic want your business. As a result, both products are pretty competitive with each other. But the cost of video editing software isn’t something you’ll want to overlook, and you don’t want to waste time learning a program you don’t like.

That means you deserve to find the best software without wasting time or money. And that’s why we’re here: To break down the similarities and differences between DaVinci Resolve vs Premiere Pro to give you everything you need to make the right choice. 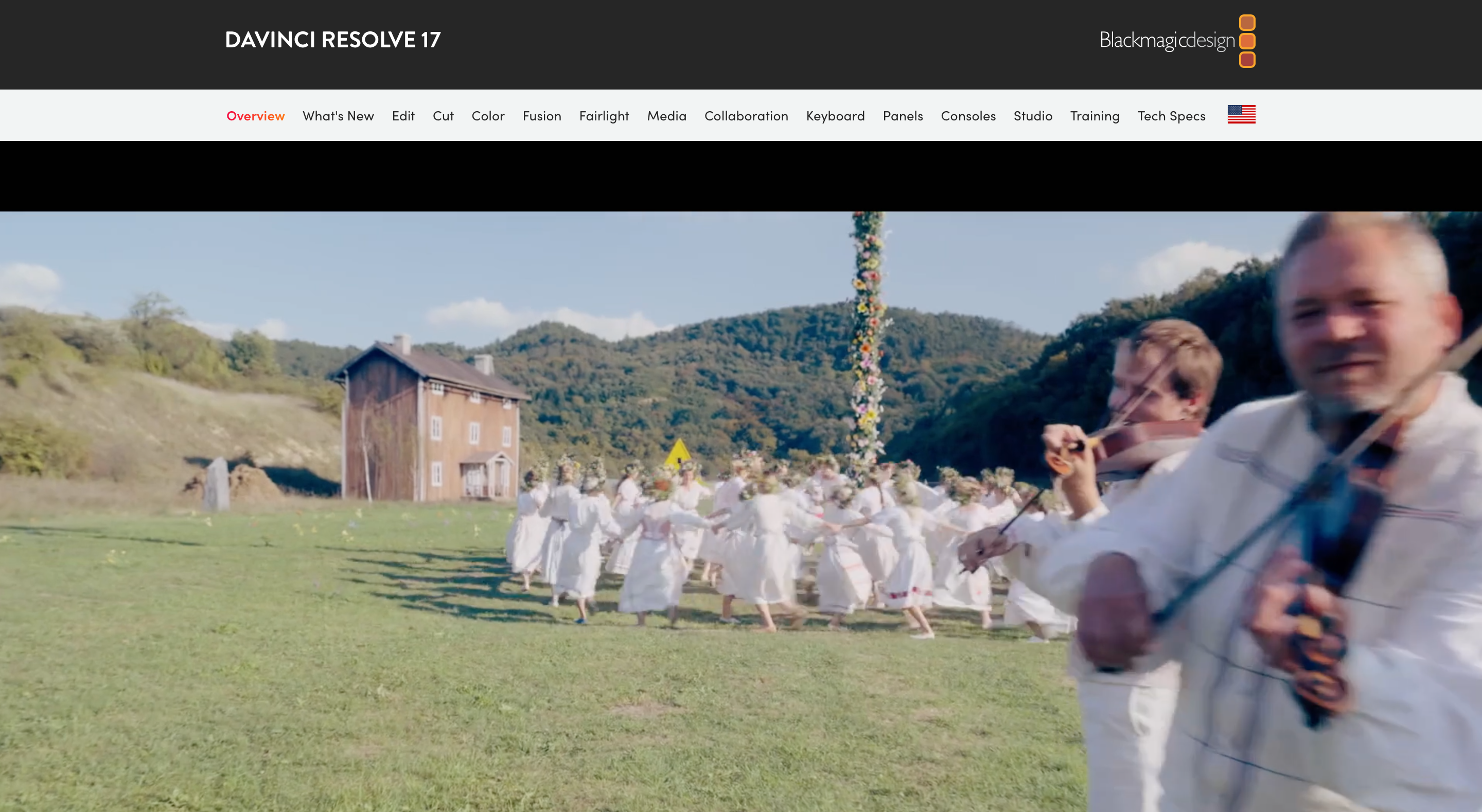 The user interface/dashboard for DaVinci Resolve is pretty much on trend with its competitors. The tool offers a few different workstations, which can be both a pro or a con.

On one hand, each workstation is dedicated to a specific part of your workflow (ex. Fusion for coloring, Fairlight for audio, etc.) and that will clean up the amount of stuff for you to sort through.

The downside of this is that it’s not necessarily an all-in-one view that gives you access to every tool or trick in a single panel.

However, DaVinci Resolve is hands-down considered the best software for coloring. Things like HDR grading, custom ranges, and color warpers all require a high-level of experience, but they absolutely set the bar so high that no other editing software can really compete with it. And all of that carries a lot of weight because coloring plays a huge role in post-production.

The newest version of the program — DaVinci Resolve 17 —  brought a new focus to its audio tools, which is important because that’s been Resolve’s biggest weakness. There’s also an improved automation system that shifts the whole project timeline to adjust for each cut.

Also, we’ll cover the pricing options later, but it’s important to note that Blackmagic offers a completely free version of DaVinci Resolve that you can download and experiment with.

It’s further proof that Blackmagic is committed to making filmmaking as affordable as possible for everyone, and it certainly makes it an attractive place to start. If you get the free version, you’ll either decide you don’t like it (and try something else or get comfortable with it) or eventually upgrade to the paid version.

Either way, you aren’t wasting any money or investing years into a product because you’ve got no other choice. And you’re bound to learn some editing skills along the way. 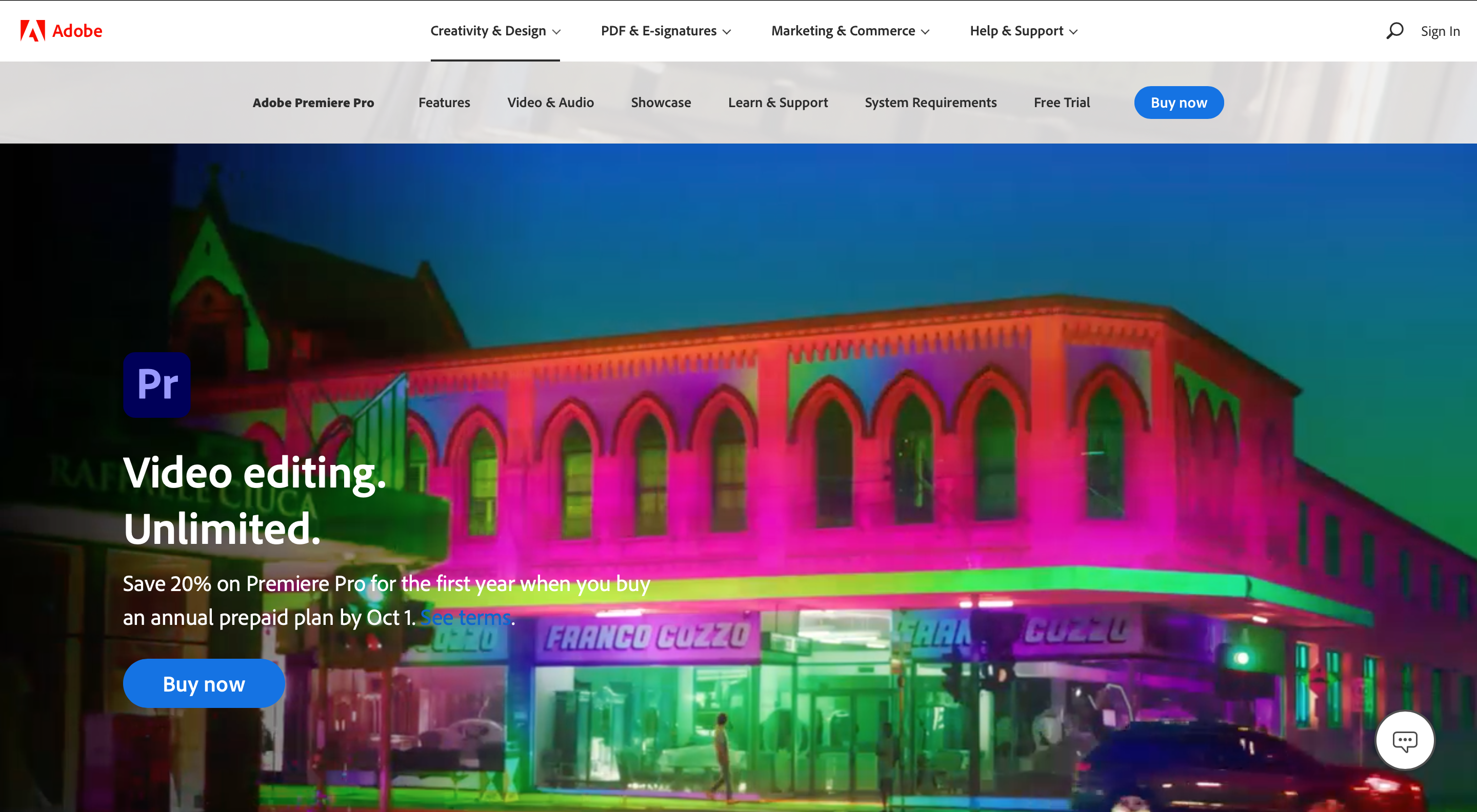 It shouldn’t surprise you to learn that Adobe also calls Premiere Pro the industry leader in video editing. (That’s just typical marketing for you.) While it isn’t a tool you’d see often in the cutting room for a Hollywood blockbuster, it’s an invaluable tool for content creators and creative teams around the world.

Easily the most attractive part of Premiere Pro is the interconnectedness across all of Adobe’s programs via Creative Cloud. While DaVinci Resolve relies on different workstations, Premiere Pro simply integrates an entire suite of powerful tools that work together seamlessly.

If you do any other creative work (or even want to mix your own audio or create your own animations) then Adobe’s toolset lets you do it within a familiar and accessible dashboard. More importantly, it also grants access to thousands of third-party integrations and extensions that can make editing even easier for you.

The biggest obstacle to deal with is that the ease of use (which makes it so attractive to many creators) also means you don’t have the depth of tools you’d find in other software options.

Premiere Pro definitely exists as a jack of all trades. But like the second half of that phrase says, the software isn’t exactly an industry leader in any one of those trades. It’s just an affordable and convenient way for people to really invest in their editing process.

Don’t let that dissuade you from checking out Premiere Pro. Sure, the program isn’t going to give you everything you want. But there isn’t a single video editing tool out there that will.

The pros and cons are more about helping you weigh the benefits and risks of each tool. If you’re looking for the “industry standard” of entry points into post-production, Premiere Pro is your answer. But if you want to really hone your skills at audio, coloring, or another facet of editing, you’ll probably need to invest in one of the competitive products out there.

We can’t really compare DaVinci Resolve vs Premiere Pro and not look at the price of these products. That carries a lot of weight in any decision, and editing software is no different. 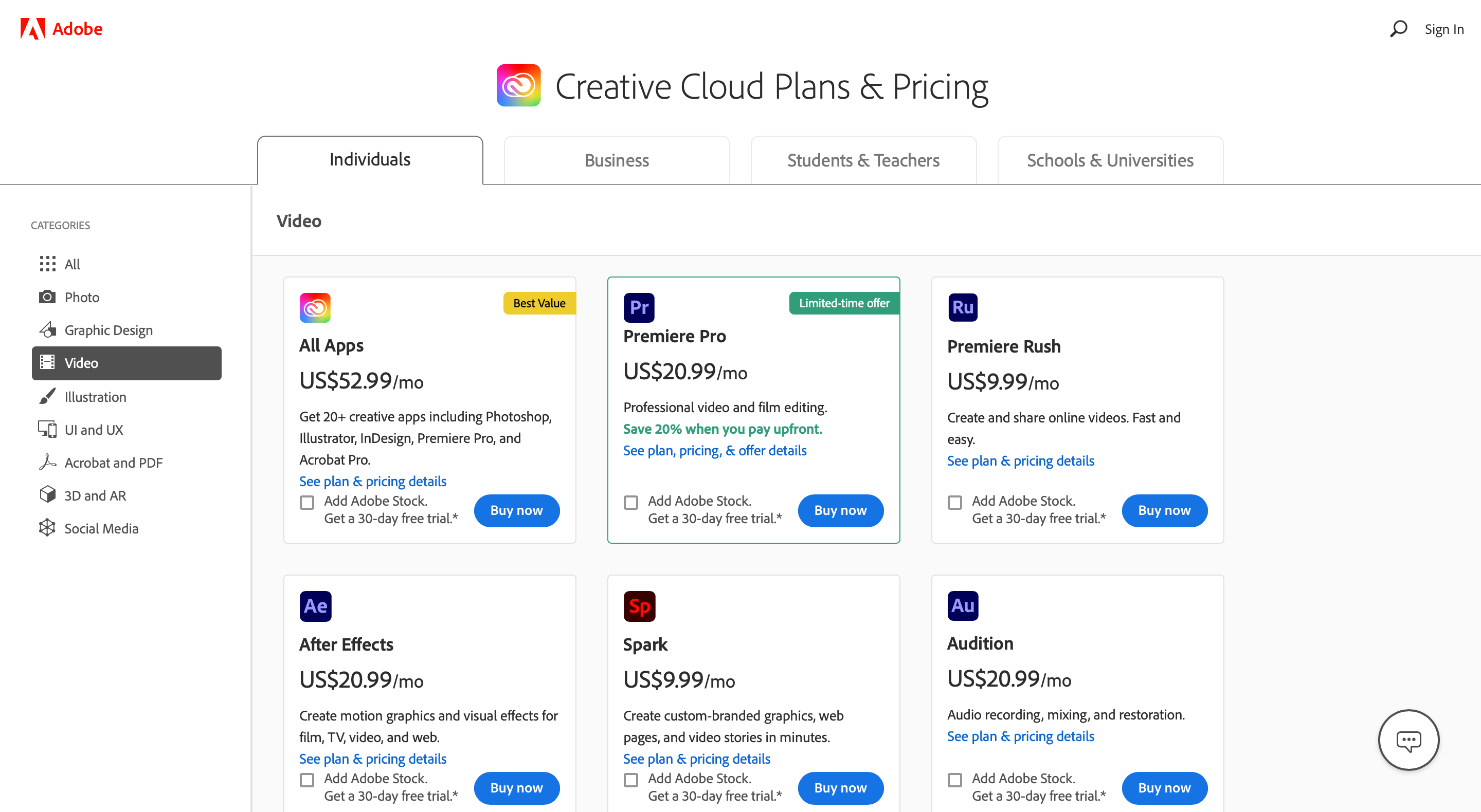 You can download a trial version and check it out for 7 days. But your payments will kick in immediately after that, so it’s more of a free introductory week than a “trial version” if we’re being honest.

On the other hand, you could purchase a copy of DaVinci Resolve 17 today for $295. While that seems like a lot, it works out to about 14 months worth of Creative Cloud. The paid version also includes all future updates to the software, so think of it as something you can use for years to come.

Blackmagic does offer a free version of DaVinci Resolve, which includes everything you’d need as a content creator: cutting, coloring, audio mixing, and even some basic motion graphics tools are all included.

Sure, the upgrade path is there for filmmakers who want access to the entire collection of tools available. But the free version is more than adequate for many creators.

You can probably pick out a few of the competitive advantages in each of these summaries. That’s because the popularity of these programs means there are a lot of creators who can share their personal experiences or post tutorials to help you learn to use an editing tool.

While there are other options out there (most notably Avid and Final Cut Pro), the truth is that no single piece of software is the top choice for every component of post-production.

DaVinci Resolve’s node-based coloring system is a go-to choice for professional filmmakers,  but the audio side of the program is easily its biggest weakness. 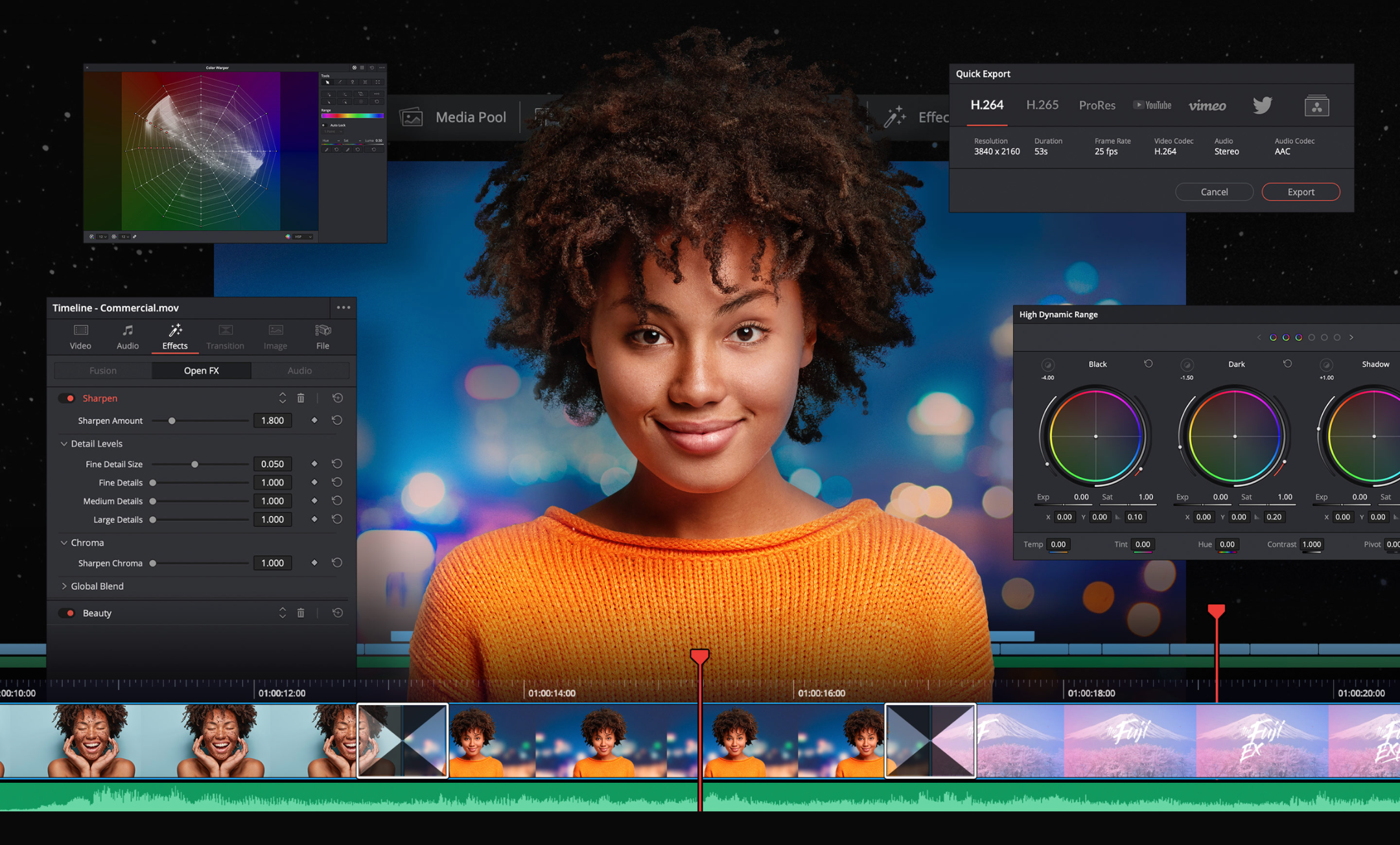 Premiere Pro leverages an entire suite of tools, but the layer-based editing tools don’t provide the same level of control as other programs.

That’s why researching these tools is such an important step in choosing the right video editing program for your needs.

The differences between DaVinci Resolve vs Premiere Pro are numerous — only you can know which of the pros and cons matter most to you.

But hopefully you’ve got a better grasp of how these two editing tools stack up, and what you can do to explore your options and level up your post-production game.