When looking back through film history, it’s amazing to think about how much of what defines our favorite types of camera shots or moments comes from psychology. I mean, how do camera shots actually work? And what is it about some of the most iconic ones that make us feel a certain way?

After all, films and television are nothing more than two-dimensional images moving on a screen. But with the right composition, lighting and camera shot design they can at times be emotionally devastating, heartwarming, or downright terrifying.

For those just starting off in film and video, you might be surprised to learn that one of the most critical elements for shaping how a shot makes an audience feel comes down to camera angles. When coupled with other thematic effects, camera angles can turn your characters into either lovable friends or menacing monsters.

Let’s explore the fascinating psychology behind shot angles and how you too can manipulate emotions and create interesting compositions with these nine integral shot angle types:

What are shot angles?

Simply put as a definition, a shot angle is dictated by where the camera is placed in relation to the character or subject. If a camera is pointed directly straight and perpendicular to the ground, it’s a 90-degree angle. If it’s pointing up or down, it’s at an angle.

As you can see in the video above (which is a great primer on what camera angles are and how they work), camera angles are one of the most crucial building blocks to cinematography overall. There’s also a lot more going on behind the scenes than just adjusting the height of your tripod, though.

Camera angles inform the psychology behind how we perceive a shot as well as any characters or objects in the scene. For example, high-angle shots are traditionally thought to make the characters look small or weak. Whereas low-angle shots have often been used to make characters look large and powerful. However, it goes much deeper than that.

Our first camera angle is the aforementioned high-angle shot type. What is this camera shot, you ask? Well, it’s simply a shot where the camera is higher than the subject of the composition. The camera is angled down and presents the subject in a way where the viewer feels the height above.

You can see an example above in this famous scene from The Shawshank Redemption. Although it’s important to note that this would be considered an extreme example of this shot type. (You could make the argument that it’s even more of an overhead, god’s-eye, or bird’s-eye shot type, but we’ll get to those later.)

But regardless, it’s a great example of what happens when the camera angle is up higher than the subject and looking down. In this instance, the subject at least has his head back and face up — otherwise you might not get to see a full expression.

The psychology behind high-angle shots can vary from composition to composition. But in general it’s often associated with making the viewer feel more powerful while the subject appears smaller and less in control.

This example above though does a mix of both as our hero has finally emerged free from his captivity and is in celebration. Meanwhile we watch from above and both feel for him and also judge him.

Conversely, low-angle shots are shot types where the camera is placed lower than the subjects with the lens angled upwards. This creates a perceived effect of making the viewer feel lower and at the mercy of the subject (or subjects), while the subjects appear stronger and more in control.

We have an example above of a low-angle medium shot from Pulp Fiction (which itself is a favorite trunk shot from director Quentin Tarantino). This shot in particular is a good demonstration of an extreme low-angle shot, as the camera makes the viewer feel like they’re literally inside of a car trunk looking up at these characters.

The psychological result is that Jules and Vincent (the two characters) appear both menacing and powerful while the viewer feels a bit uneasy and helpless. This foreshadows how the next few scenes will go for other characters in the story.

Moving on, we need to at least talk about your standard non-angled shots. While you could easily argue that pretty much any shot type will have some degree of angle, there is at least a theoretically regular or “medium” shot type which is close to eye (or face) level.

These shots are important to keep in mind as they should at least be differentiated from other angled shot types like high, low, canted, or other styles.

We’ll also go a bit more into camera levels below to give you an idea of how not only the angle is important, but also the height. 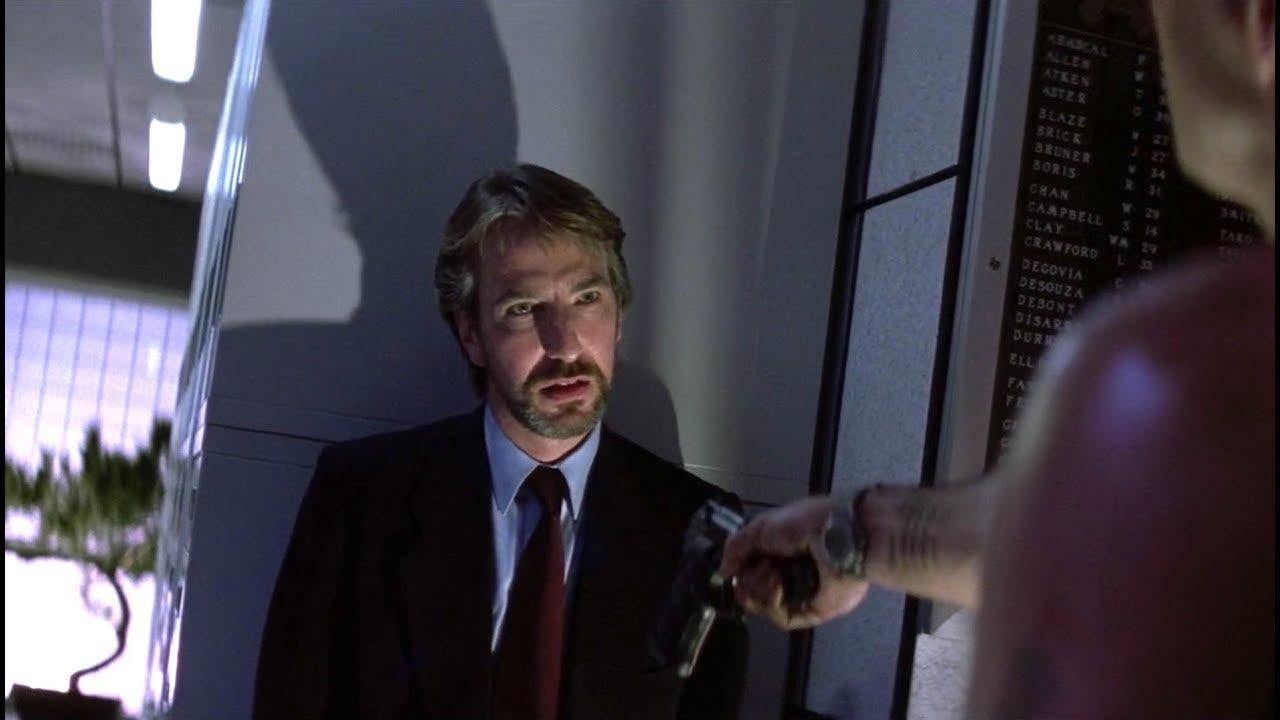 As one of my favorite shot angles and types, the Dutch angle shot (also called a “canted angle” or “oblique angle” shot) is one of the most powerful camera angle tools in any cinematographer’s arsenal.

The Dutch angle is achieved by rotating the camera on its roll axis to a degree. (You can think about it as putting some cardboard underneath one side of your camera so it sits unevenly on a surface).

Let’s look at the example of the Dutch angle in action above in a scene from Die Hard. As you can see, the camera is angled a bit to its right, which makes what would have been perpendicular lines in the composition appear crooked (or canted).

This video provides more insight into Dutch angle shots, their history, and how you can use them.

The psychological effect is quite unnerving. The audience can sense that something is amiss, as things quite clearly are not lining up so to speak. In the context of this scene, our villain Hans Gruber is pretending to be someone he’s not, and our hero appears to be wrongfully trusting him. 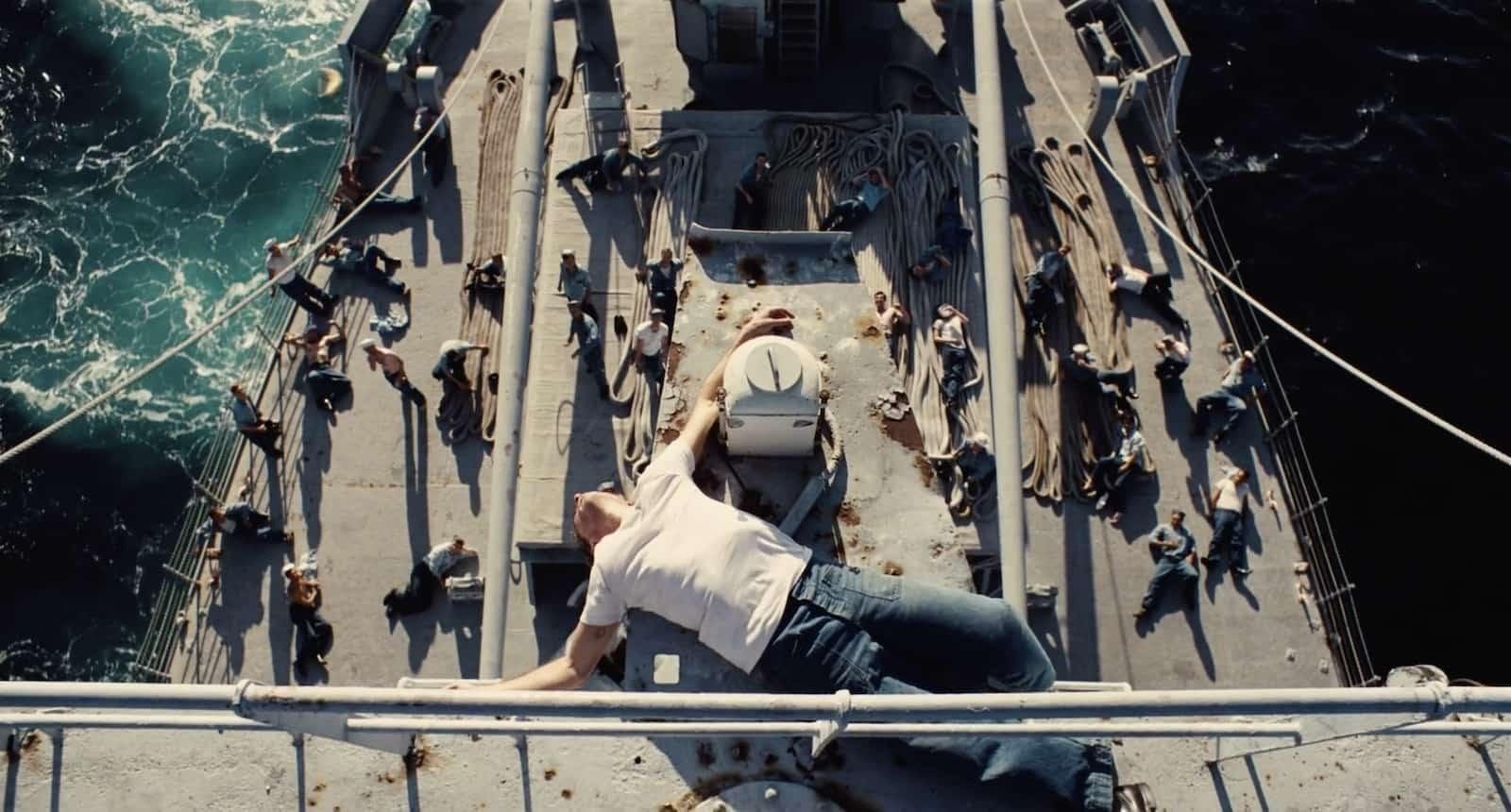 As mentioned earlier, an extreme version of the high-angle shot is the overhead shot (also called a god’s-eye shot, bird’s-eye view shot, or aerial shot).

Similar to a high-angle shot, the overhead bird's-eye-view shot is meant to be framed where the audience is looking down at the subject.

Here’s a great example of an overhead shot from The Master. As you can see, P.T. Anderson has put his camera high above his subject so that the camera appears to be looking straight down. This is a truly creative frame as the composition allows for there to be plenty of information in the foreground (our subject) and in the background (the sailors below).

The psychological effect of such camera angles is one of omnipresence, hence the “god’s-eye view” moniker. When looking directly downwards at a subject, the viewer feels a new level of disconnectedness, almost as if they are an impartial observer.

There is also a heightened awareness of the setting and a character’s environment and how they play into the character’s psyche.

What are camera levels?

Similar to camera shot angles, camera levels are another key element in a shot’s composition and cinematography. Simply put, a camera level (or shot plane) is the height of the camera off of the floor.

There’s of course a bit more to it than that basic definition, especially once you start adding in camera shot angles to these different levels and planes. However, to keep things simple let’s take a look at some of the different shot levels which you can experiment with and how they might inform your cinematography.

Going back to our “medium” or standard camera shot type, eye-level shots are often thought of as the best starting point for simply framing up a “regular” shot. It makes sense too, as eye-level would most closely mirror how a person would normally perceive the world.

By setting your camera at what would be your natural eye-level, the psychology behind the camera shot allows for viewers to feel a natural connection with your subject or subjects.

From there, you can experiment with adding different camera shot angles, however if you truly want a basic setup for simple YouTube videos or a boilerplate film scene, this should be your first choice.

You can see an example of a sitting-eye-level shot above in this YouTube video.

Alongside eye-level shots, you could also consider sitting-eye-level as a separate (or the same) camera shot type. Looking specifically at many television shows or YouTube videos where you have one subject directly addressing the camera and audience, these subjects might often be sitting down.

Unless you want your camera to be a bit imposing as you angle down at them, it is of course understandable to adjust your camera to a lower position to match your subject’s sitting eye-level. 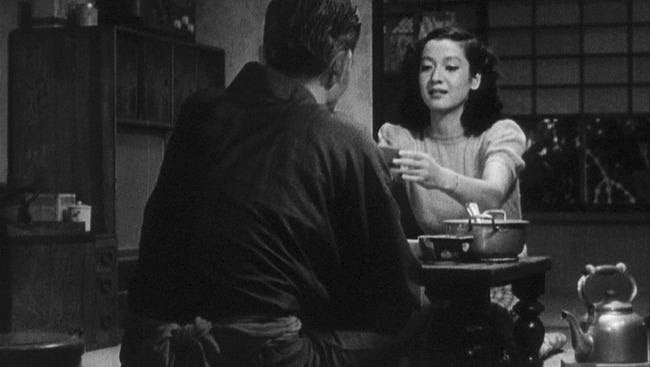 As we continue down from the sitting-level shot, you may find that there are occasional reasons to position your camera at even lower levels.

Take for example the knee-level shot, which you might only find these days as a convenient way to frame a low-angle shot where the camera is directed back up at subjects sitting or standing.

However, if you look back through cinema history, you’ll find that certain directors (most notably the Japanese director Yasujirō Ozu) use knee-level shots as a way to allow the audience to view a scene from a position as if they were kneeling on a tatami mat.

And as such, the knee-level shot has even been called a tatami shot over the years as an homage to the famous director’s style.

Finally, while these might indeed be rare, you’ll also find examples of ground-level shots (or even lower) from time to time. These camera shot types are most often reserved for gimmicks or POV style compositions where the camera is moving along the floor as a way to simulate the actions or viewpoints of someone or something.

However, you can also use these ground-level shots as a way to really push the limits of just how extreme a low-angle that you can create if you really want to experiment with how tall and mighty you might want your subjects to appear.

While there are technical reasons to use or not use certain camera angles, they are most valuable as pieces of visual storytelling. The angles and levels you choose let you steer the viewer's attention and even their emotions. As a filmmaker, that turns trying out different techniques into a fun and creative experiment.

So, while it’s important to learn the lingo and study from history, feel free to experiment with these different camera angles as you shape your own path.

If you’d like to read up more on other camera shot types and cinematography tips and tricks, check out these articles below.

Power Dynamics in Film: The Impact of a Low Angle Shot

The Psychology Behind the Dutch Angle Camera Shot

Unlocking the Power of the High Angle Shot in your Cinematography