[Free Download] Do I Really Need a Storyboard Template? 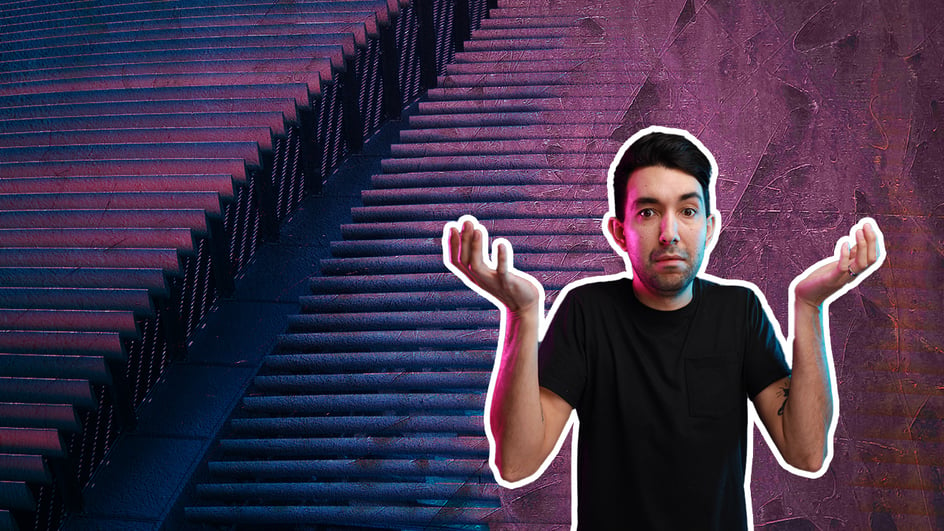 As a company filled with creative people, we like to think of storyboarding as the process of creating structure that a whole team will share.

Whether you’re building a script, choosing locations for filming, or starting to think about background music, a storyboard can help. It’s a technique that helps conceptualize and organize ideas before production, which saves you time, effort, and money.

But storyboarding isn’t just for big-budget projects. Ad agencies, independent filmmakers, corporate videographers, and even cartoonists use this process. Anything with a visual element can benefit from storyboards.

For novels and screenplays, writers use outlines to stay organized, keep track of ideas, and easily review specific sections. But don’t let this great organizational tool become some secret writer superpower — find ways to improve your creative projects too!

In case you’re curious about storyboarding in general, let's explore some background information on what the process is and how it will benefit you.

And yes, you'll get to see some storyboard examples along the way.

What Is A Storyboard?

A storyboard is a collaborative resource to help organize a video production. Many filmmakers have a clear image of certain shots in their head. A blank storyboard template gives you a place to put those ideas down and visualize how the project will come together.

What we think of as “storyboarding” today started back in the 1930s, but it had been a part of storytelling (and specifically filmmaking) since at least the 1890s.

Storyboarding helped creatives transition from newspaper comics and traditional art and into the era of “moving pictures.” As the storyboard process became more integral to the earliest days of film production, the practice continued to grow and evolve.

But unsurprisingly, the modern storyboard concept was developed at Walt Disney Productions.

Disney animators drew single frames from different scenes, then arranged them in sequential order to provide a visual reference for everyone involved with the project. It functioned like a comic book and sometimes included pieces of a script or notes to give direction for mood and animation. 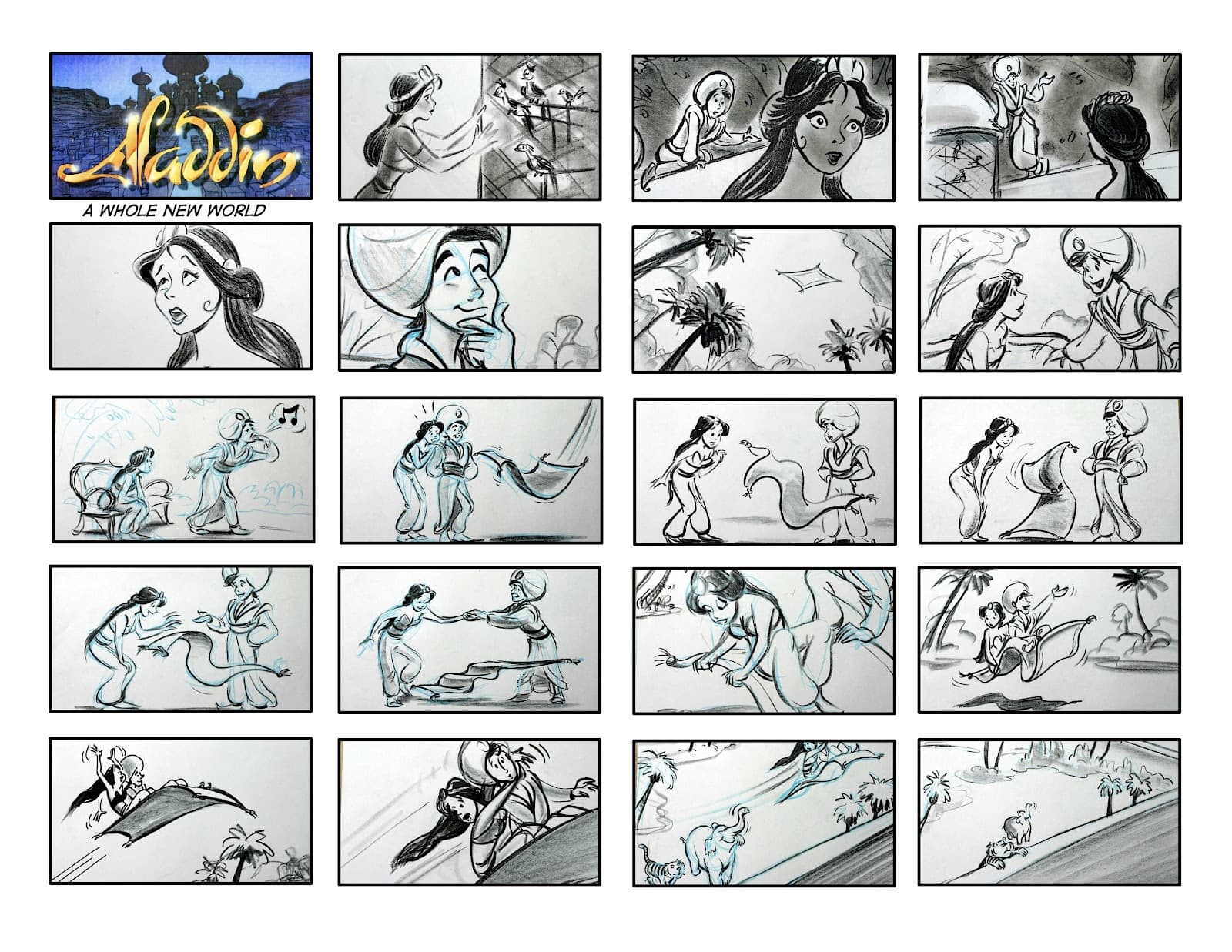 But the process was never restricted to hand-drawn animation. Gone With The Wind — which released in 1939 — is considered the first live-action “blockbuster” to have been fully storyboarded in the new Disney format.

The process has remained relevant because it just works.

For Disney, storyboarding became even more important as the company worked on bigger projects. And the eventual rise of computer animation sealed the deal: storyboarding was an important step in keeping the Disney magic throughout the pre-production process.

As a content creator, here’s your big takeaway: When you are collaborating on a project, it’s important to see how elements from different people will come together. And the sooner you tackle that challenge, the easier it is to divide and conquer while still meeting the deadline.

What Can I Do With Storyboards?

Detailed comic book-style storyboards are great in theory, but do they really work for other types of projects? How do they apply to live-action videos? Do they affect creative freedom during a shoot? Is it worth using them as an independent creator?

Those are all solid questions to ask, but the good news is that storyboarding is as old as the film industry. It’s been tested by thousands of people over the years, so you don’t have to worry — a process this old has at least something that any creative can apply to their process.

A blank storyboard template will let a writer map out a list of scenes to pair with an outline. A web developer can illustrate a JavaScript function on a page. A photographer can draw out a shoot to remember their favorite angles.

And the best thing is that storyboards are flexible and scalable. You can provide as much or as little information as you need to make sense of a particular scene or shot. 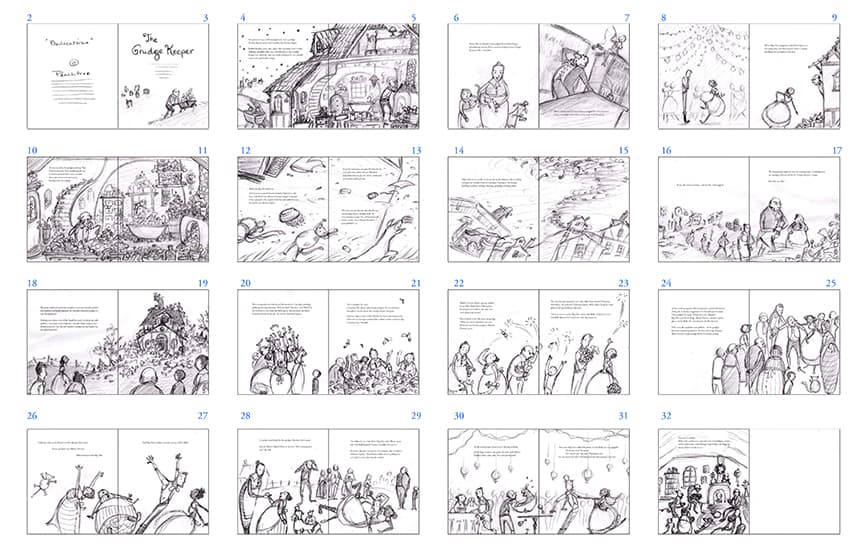 Do you want to draw an arrow to indicate camera push in? What about noting a character walking through a scene, and how a tracking shot highlights that movement? A printed, physical document gives you leeway to make notes and even change direction mid-project without losing sight of the overall vision.

That’s true whether you work with an 30-person ad agency or have your own wedding video business. Independent creators face the same challenges as anyone else, and they often do it without the resources or oversight of a more experienced supervisor.

For those of you who fall into this boat, think of a storyboard as an easy way to keep yourself accountable. This can be especially helpful if the project is part of a side hustle — keep track of your best ideas, no matter how long it takes to complete the piece.

And if your next project is a corporate video or something with a lot of people involved, a solid storyboard template can save you time and money. It’s an easy way to establish consistency for yourself and other creatives.

Oh, and it also helps non-creative people (like that project manager who hired you for the job) get a clearer idea of your vision. They might still ask you a hundred questions about each shot, but at least you’ll have a clear reference point to show them.

What To Look For In A Film Storyboard Template?

Remember, storyboarding is a way to collect, organize, and share ideas. And you’ll probably have a lot of ideas over the course of an entire project.

Your storyboard can include anything that helps you visualize your project. Many filmmakers focus on things like camera angles, while others want to draw out the on-screen movement to help link different shots together.

That’s why a good storyboard template is so important: It helps you track all the details that matter to your particular style of filmmaking without worrying about all the other pieces.

Part of getting good value from a storyboard template is knowing what to include. In most cases, a storyboard is written to match — or at least go alongside — a completed script. That way, you read what’s happening, and then pair that with the visual of how it’ll look on screen.

But that’s not always the case. If you’re filming a corporate video or working with an ad agency, you may not have a script. In that case, you’ll need to put extra details about the shot type and how long you’ll hold the shot.

A storyboard can only be as effective as the amount of information it holds, after all.

While the list of “stuff that matters” is completely subjective, there are still some popular items  that a lot of filmmakers want or expect from a storyboard. Here are a few of them:

This isn’t just some random list. Our Creative Team pulled on decades of filmmaking experience to build the flexible-but-still-comprehensive template we use on projects.

“For me, storyboards are incredibly useful when it comes to complex camera moves, and character positioning/movements. This is helpful when you are working with a crew and need to explain what action is taking place and how you are going to film it, and especially helpful when those things are complex.”
— Chris Haggerty, Filmmaker at Soundstripe

You can find all sorts of storyboarding tips and tutorials on YouTube. And if you’d like more context, there are long-form articles (or even entire sites) about the history and evolution of storyboarding.

But our guess is that you’re looking for resources to help you try out the process. That might mean a storyboard template example. Or maybe you want to learn about the value of storyboarding and see if it can improve your workflow.

Anyone who’s worked with Disney or Pixar walks away with a deep appreciation for the hive-mind creativity there. Renowned consultant Bill Capodagli wrote books on the culture of both companies, and those experiences made him a believer in the power of storyboards:

“Storyboarding is what I call an ‘idea landscape’ — one that can help unleash creativity, improve communication, and identify practical solutions to complex problems. The beauty of storyboarding is that ideas from an entire team are harnessed, not just those from the extroverts or vocal members.”

As creatives, we’re always looking for a new tool to help streamline the process. So if storyboarding will trim down time the time you spend on reshoots or smooth out collaboration with a team, you should download our blank storyboard template and give it a shot.

That way you can focus on creating the things you love.

Get your free video storyboard template

To wrap things up, be sure to download your professional storyboard template here today!

As long as you feel that your free storyboard is playing a critical part of putting your ideas on the right foot and in a powerful way, you're free to create your story however you see fit.

Hopefully these storyboard templates are helpful as you try to sketch out your story from scratch. It's also helpful to look into using layered PSDs and other similar files so that you can bounce between recent versions in case you have different angles to explore for your story.

In the meantime though, if you'd like to download free resources or check out other templates and articles, feel free to click on any of these Soundstripe blog articles: