How to Create a Background for Your YouTube Intro (Feat. 5 Tools)

Think of a YouTube intro as your elevator pitch to new viewers.

You have seconds to make a good first impression once someone clicks on your video, and let’s face it: YouTube is probably the most highly competitive platform for creators.

So, once the intro begins, its entire job is to stop viewers from jumping to one of the other 500+ videos uploaded every minute. (Suffice it to say, the stakes are high right from the jump.)

For YouTube creator Ben Johnson, an intro is an opportunity to set your channel apart from the rest and give your audience a strong sense of who you are as a content creator.

“Intros are awesome because they quickly allow new viewers to get a feel for what your channel is all about. When done well, they can add a lot of energy and clarity to your videos,” Ben said in his video on this exact topic.

Animations, motion graphics, text effects, video clips — all of these elements work together in an intro background to showcase your YouTuber brand. Even if a viewer knows nothing about your channel, a well-crafted intro can pique their interest enough to keep them engaged.

If you’ve been going back and forth between multiple YouTube intro ideas, it might be time to start experimenting with the design using intro maker tools. There are plenty of free and paid options out there — some that you might already love and others that you probably haven’t tried yet.

And who knows? Trying your hand at a new intro maker tool could inspire a new wave of creativity.

Here are five tools for creating a YouTube intro that are worth checking out.

If you’ve watched any of Soundstripe’s Filmmaker Tips & Tricks videos on YouTube, you’ll recognize this image from our recurring 7-second intro:

A fun fact about this intro is that it was designed completely in Fusion, a compositing page in DaVinci Resolve. Both the background image (i.e., the close-up of the camera lens) and sound effects were taken directly from our library, and everything else came together in Fusion.

This tool has been used by Hollywood filmmakers, indie filmmakers, and other creators to create effects, fine-tune animations, exclude unwanted objects (like a boom mic), and more.

Not only can you create killer YouTube intros, but you can also use Fusion to add visual effects and motion graphics to any other project you’re taking on now or in the future.

Like Fusion, Adobe After Effects is a pro-level video effects tool that you can use to create a YouTube intro from scratch or from any of the in-app templates and effects.

If your preferred editing software is Adobe Premiere Pro, this tool might be your go-to resource for creating motion graphics and animation. You can add lighting effects, track motion, key green screen footage, and create an all-around cinematic-quality project.

In the tutorial above, YouTube creator Tech Infusion walks viewers through the process of designing an intro, adding a mask to reveal a logo, and making adjustments to visual effects in After Effects.

The second and last Adobe tool in this list is the Adobe Spark app, which is especially useful for designing a YouTube intro on mobile devices. If you don’t want to build an intro from the ground up like Tech Infusion did, you can take advantage of the many available in-app templates.

From there, you can add branding elements, play around with text effects, and create professional-quality animations in your intro. 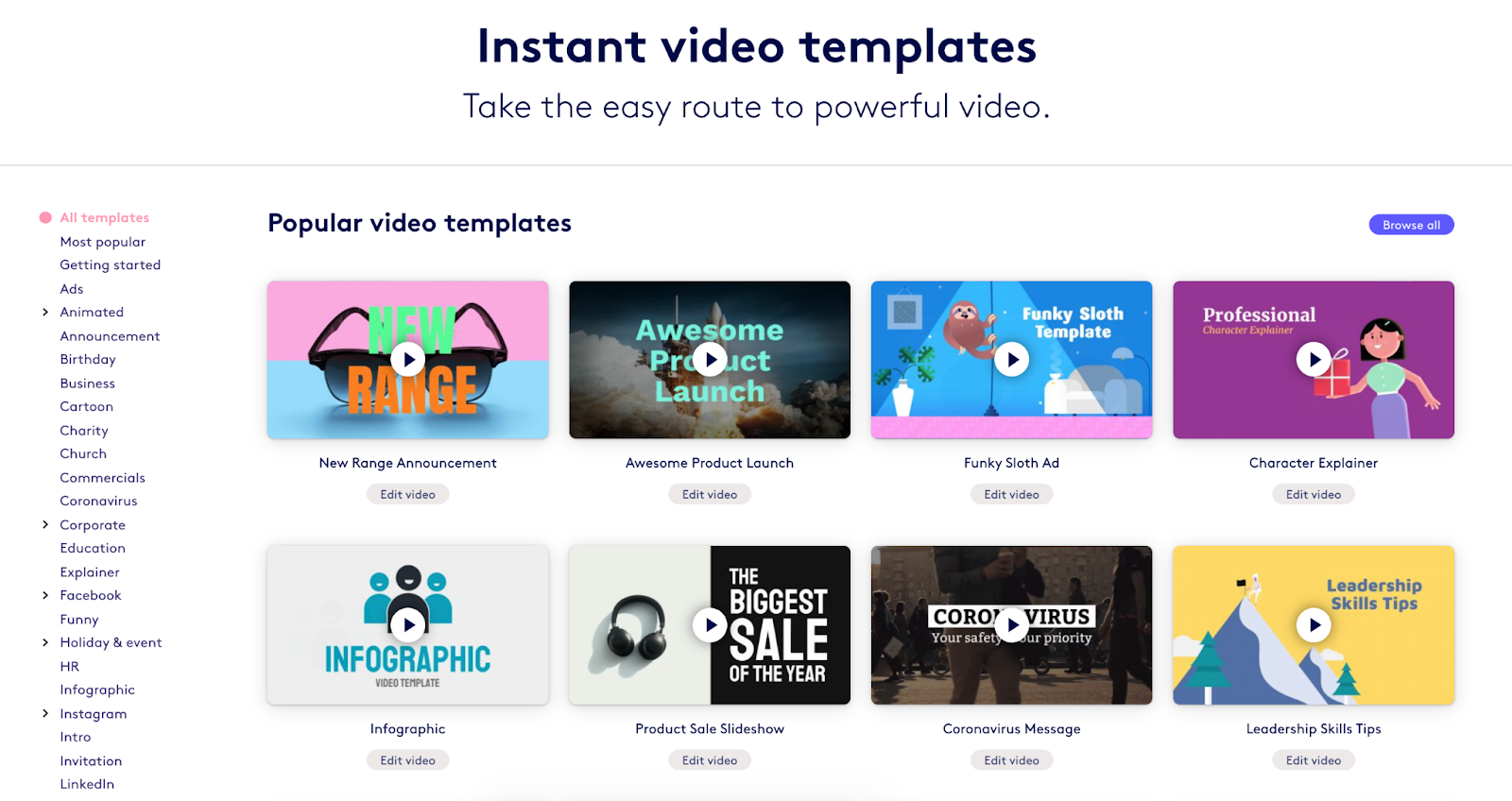 Biteable is a video making software that is particularly popular with creators in corporate video production, but it’s really a tool for anyone who wants to make intros with great visual effects.

When you navigate to the templates tab on the website, you can peruse a wide variety of pre-made templates that you can then edit to make your own. While there is a free plan, the features are very limited unless you upgrade to a paid version.

Here’s the thing about Canva: It’s user-friendly, fun to use, and free (unless you want to upgrade to the Pro version).

In the video above, YouTuber Aurelius Tjin demonstrates one of the ways that you can create a YouTube intro with visual effects and transitions exclusively with this tool.

By layering multiple pages, you could make an intro sequence that gives your viewers an overview of what they can expect from your channel. In Aurelius’s case, the intro highlights his channel’s strengths: social media tips, lead generation tips, and step-by-step tutorials.

With Canva, you’re able to experiment with different intro styles, design your channel logo, and create branded content for social media and other channels. It’s a useful resource, even if you still prefer another intro maker from this list.

A common denominator in every great YouTube intro is that it features quality music and/or sound effects. And that’s because what your audience hears in the intro is just as important as what they see.

If your 20-second intro is completely silent, viewers will probably choose to bounce rather than keep watching. By adding audio to the video, you can immediately take your intro’s production quality to the next level and keep your audience hooked.

One way to source music and sound effects for your YouTube videos (and other projects) is to turn to a stock media library like Soundstripe. With a subscription plan, you can license all the media you need, follow YouTube’s music policy, and be protected against Content ID claims.

At the end of the day, your YouTube intro is part of your branding as a creator. Take advantage of the tools and resources available to you so that you can make a stellar intro that you — and your audience — will love.

If you found these tools helpful and are interested in discovering more tips and tricks for starting and/or growing your YouTube channel, here are a few more guides from the Soundstripe blog:

How to Come Up with Unforgettable YouTube Intro Ideas

What is the Ken Burns Effect (And How Do You Use it?)