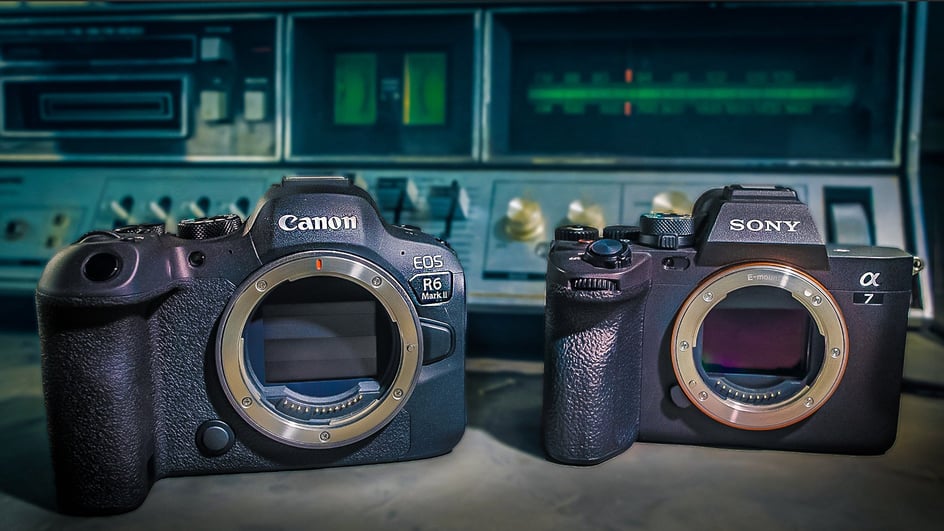 Whether you’re looking for a new camera to shoot your dream indie film, or the perfect camera for launching your YouTube channel, there’s certainly a lot of decisions and a lot to consider.

From legacy brand names like Canon, Sony, Panasonic, and Fujifilm, to newcomers like Blackmagic Design, it seems like everyone has a great 4K digital camera that sits in a range between $2,000 to $4,000 these days.

To help any interested buyers make a final decision on which new camera is right for you though, we’re highlighting two of the best options currently on the market in this showdown between the Canon R6 Mark II and the Sony a7 IV.

Both great options from some of the top manufacturers today, but also each distinct in what makes them great. So follow along with our video review from our Soundstripe YouTube channel, and check out some of the full specs and details for each camera below.

Did Canon finally make a contender to Sony?

So for the purposes of our comparison reviews for these cameras in this article and the video above, we’re focusing on the cinematic capabilities of each and how they can stand out in a real life video setup. Our hosts Dave Maze and Chris Haggerty took each camera through the paces at their max settings and with the goal of getting the absolute best (and most cinematic) footage possible with each.

And in truth, when shooting 4K 10-bit in their respective LOG formats, matching 24-70mm starter kit lenses for each, and using the same gimbals and sliders, you do start to see both just how great these cameras are as well as some of the subtle ways each stands out.

And while we’ll get to the specific specs and features for each below, if you’d like a point-by-point comparison of each camera as outlined in the video above, here are some timestamps for discussing camera elements like body comparison, ISO performance, AF capabilities and IBIS.

Now let’s look at each camera a bit more in depth.

Since being announced back in early November (read our full write-up here), the Canon EOS R6 Mark II has promised to perhaps take the helm as Canon’s new mid-tier mirrorless flagship camera. As a highly-anticipated follow up to their EOS R6 camera from just a few years ago, the new Canon R6 Mark II features a very capable 24.2MP CMOS sensor along with some great specs with its aforementioned 4K at 60p 10-bit internal video recording.

Being so new though, there’s still some info regarding this R6 Mark II that we’re waiting to find out in terms of native ISO and other features, but overall this updated R6 is promising to be one of the best cameras heading into 2023 for cinematic-minded film and video pros.

The Sony a7 IV

Similar to Canon, Sony has a long line of super awesome digital video cameras — and in truth has stood out with their early adoption of mirrorless camera technology in particular — making the Sony a7 IV another great example of quality camera manufacturing in a long line of standouts.

The updated Sony a7 IV is no different and continues this legacy admirably with its 33MP Full-Frame CMOS sensor capable of the same 4K at 60p in 10-Bit video recording and all of the usual bells and whistles you might expect from a Sony workhorse.

In our video review Dave outlines how it shines and at times falls behind Canon, but overall is a truly awesome option for those familiar with that Sony look, feel, and performance.

Which one is right for you?

Without editorializing too much (we’ll leave that to our video review), there is really not a right answer as to which is the better camera in this Sony a7 IV vs Canon R6 debate. With both boasting great dynamic range, battery life, highlight tone priority mode options, auto focus capabilities, great video mode options, image quality, and continuous shooting modes, these two cameras are both great.

However, while our host might prefer the Canon R6 Mark II right now, if you’re a fan of either brand over the other, or looking for something specific with your usual amount of video work, you can’t go wrong with either.

But, if you do feel strongly either way, leave your thoughts in the video’s comment section or voice your concerns on our community page here!