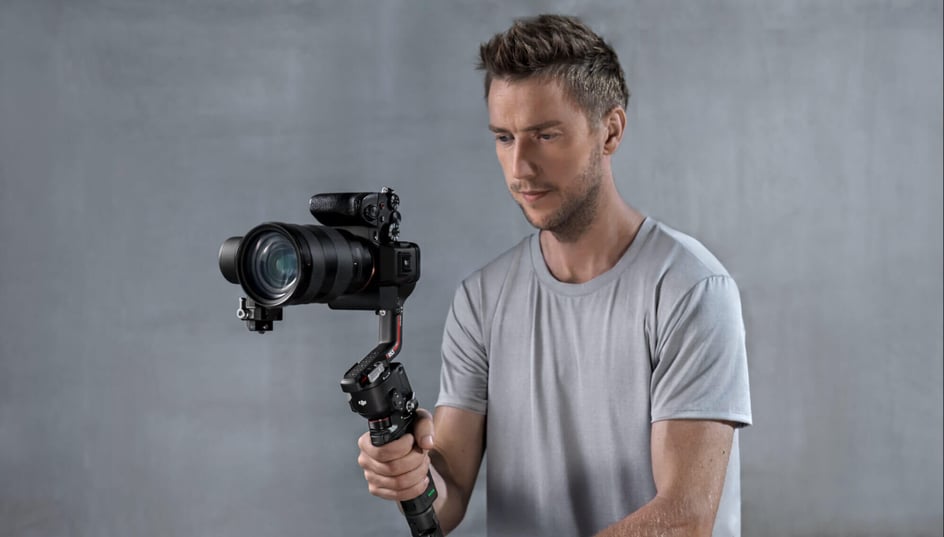 In the very first days of filmmaking, the camera sat still, static, and silent. Which made things, in some ways, very easy. As the art of filmmaking (and camera technology) progressed over the years though, things became much more complicated.

Movement was unlocked and the world of steadicams and stabilizers and gimbals became the new norm. Flashforward to the present day with tiny, lightweight, and high-powered digital video cameras and endless pieces of mobile film gear and it’s again very easy to put things into motion.

Follow along with the video from our Soundstripe YouTube channel as we explore some of the best camera moves and tricks which you can perform with the new DJI RS3 gimbal stabilizer.

The first camera move Dave and Chris showcase is the iconic “Michael Bay'' shot. If you’ve seen any Michael Bay films (like Transformers, Bad Boys, or Ambulance) then you know the ones were talking about. The camera moves in from a low angle and orbits around our stoic heroes (usually as all hell breaks around them).

Our second camera move is another staple in any filmmaker or videographer’s arsenal. Now, on a bigger, higher-budget set you might expect your DP and camera crew to operate a real professional jib. However, for many indie filmmakers or content creators, these camera crane devices aren’t readily available.

But with the right touch (and a bit of video editing expertise to smooth things out), you can actually recreate this jib look with your gimbal setup. And trust us, the DJI RS3 does a great job of keeping the camera smooth and in-focus as you pull off this move.

One of the most famous shots in filmmaking history, the “Vertigo shot” (so named after the film Vertigo in which filmmaker Alfred Hitchcock first introduced mainstream audiences to this technique) is a bit more complex, but still easily recreatable.

All you need to do is physically move backwards away from a subject while simultaneously zooming in towards the same subject. Now, on a professional set this would usually be done with a dolly track setup and a camera crew pulling the zoom and focus at the same time.

However, in this tutorial we can see Chris and Dave achieve the same effect by using their camera’s auto-focus while completing the dolly on foot, then adding the zoom in later during the editing process. Viola, movie magic!

Here's a great segue into talking about our deep dive on shot types and angles (which covers nearly every shot type known to man). But suffice to say, the low angle shot is indeed an awesome shot type which every filmmaker should utilize to convey power and dynamics.

In this example we see the guys deploy the low angle shot type as a way to make their subject appear more interesting juxtaposed against the high-arching backdrops in their video.

As we alluded to early in our list, an orbital shot is a type of camera move where the camera is put in circular motion around a subject. The Michael Bay shot is an extreme version of this which uses a low angle and very fast motion, but you don’t have to only do this trick that way.

If any camera move is truly unlocked by using this new DJI RS3, it might be the orbital shot, which is usually very hard to pull off as it requires a great deal of balance and focus. However, when combined with a light camera (like the Canon R5), the RS3 is about as light and flexible as a gimbal setup can be. The operator can even perform moves like this with one hand while focusing on stability and balance.

Perhaps the “coolest” camera move on our list, the vortex shot can be aboslutely jaw-dropping when done properly (and occasionally) in a video. However, if you do it too quickly or slowly, or if you use it too often, it can quickly disorient and even annoy a viewer.

What is it, you ask?

The vortex shot is a camera flip where the operator spins the camera to simulate the viewer doing a flip. The trick is to bust this bad boy out at just the right time and with just the right purpose. For example, in our video tutorial, we see the vortex shot being used to follow a fun skateboard trick which feels appropriate as the subject is flipping along with the camera.

Finally, one of the most unique camera moves and shot types for this DJI RS3 setup is the panning timelapse shot. As Dave mentions in the video, this type of shot would traditionally require some extra gear to orchestrate this hybrid photo/video trick.

However, if you’ve invested in a smart gimbal solution like the DJI RS3, you can actually use your stabilizer to handle this camera shot type. All you need to do is set your start and stop points, time intervals, and camera settings to get some beautiful — and quite cinematic — moving timelapses.

Ultimately, the goal of any video professional (or commercial photographer for that matter), is to find new and creative ways to add movement to your shots and scenes. One variable to consider is the subject itself, and how they can move in ways which can make it appear like you've moved the camera closer or further away.

Also, as you can see in the example scene above, a wide lens and low angle shots are always preferable to let you shoot more depth and add additional information (and visual data) to any scene.

Regardless though, don't be afraid of the learning curve of working with a gimbal and just really try to have fun with things.

Hopefully all of these camera moves and filmmaking tricks have been helpful. (And hopefully, depending on your settings, you'll be able to distinguish yourself from a run-of-the-mill commercial filmmaker with these gimbal moves.)

If you’d like to check out some more tutorials and advice, feel free to explore these additional resources from the Soundstripe blog: