What Are Stems in Music? And How to Use Stems for Video 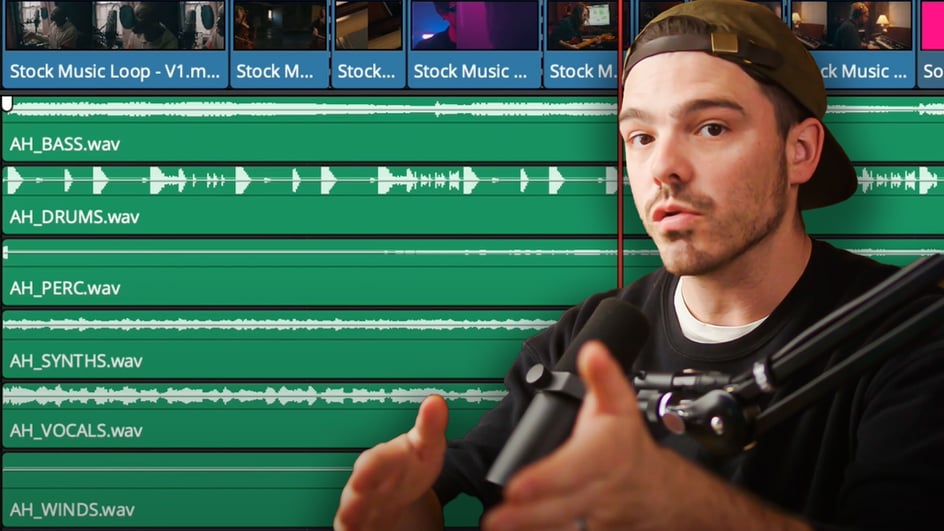 Let’s go over everything you need to know about working with stems in your film and video projects.

Because, let’s face it, video editing is often the part of a video project done last. We’d love to all be creative video editors working at Terrence Malick-ian speeds while sipping espressos and taking naps for creative inspiration.

But more often than not editing needs to be done up against a tight deadline. This means that the one part of the post-production process which can often be the most laborious is the one in the most need of help.

Where do stems come in?

We’re talking about working with sound and music and that’s where stems come in. In the old days of video editing (5-10 years ago), video editors had to pull in audio tracks then put on their audio editing hats to splice up a track to make it longer, or shorter, or feature certain parts.

However, these days with stems (which you can download with every Soundstripe track) you can move much quicker as you simply select which track stem you’d like to use for each section of your video.

What does all of that mean exactly though? Let’s backtrack and catch you up on what stems are and how you can use them for video.

What are song stems in music?

If you watch the video above from our Soundstripe YouTube channel, our host Chris does a great job of breaking down what stems are and how you can use them. But, if you’re hard at hearing, or simply want to read an easy-to-understand definition, here’s your answer to the question above.

Stems are the isolated groupings of similar instruments or sounds which, when combined, make up an entire track. Stems can be manipulated separately of one another to give you the most creative control over the sound of the overall track.

For example, as you can see laid out in the video, many music tracks can be broken down into different sub-tracks which might include options like drums, synth, guitar, vocals, etc…

Instead of trying to find a way to isolate the different sections yourself (which can be tricky and time consuming), downloading stems from a place like Soundstripe can lay out these specific tracks for you — allowing you the freedom to edit them in and out as you see fit.

Working with separate stems in video

In practice, this allows a creative video editor so much more control in terms of deciding which instruments and tracks go with different parts of a video. Since all of these tracks are coming from the same song, they’re synced up and go together perfectly.

However, if you want to just focus on one group you can pull that out to the top yourself. One way to think about stems is as a tool to remix a track to your liking.

Another way editors use stems though is usually to help bring a track down in terms of sound and scope. A full audio track with all of the instruments going can be quite loud and chaotic (which is good for certain situations).

However, if you have a video or film which needs a quieter background so that the audience can focus on dialogue or something else on screen, just using a bass track or background vocals can be a great way to create ambiance and build up before going back into the full track.

Those are just some basic examples though, the real beauty of working with stems is that it allows you the video editor full control to experiment and try out different track elements at different parts, different volumes, and for different thematic results.

Wrapping up music production and your final mix

At the end of the day it's easy to define what are stems in music production and how they work. However, as any mix engineer will tell you, when it comes to trying to work with multiple tracks and different stem files and audio files in your audio production, things can get tricky quickly.

The best tip is to try to thing of your audio stems as individual tracks. Since Soundstripe allows you to export stems individually, this means you can really dive into each as an audio file which can be tackled independently. Overall though, stem mastering is one part of an overall final mix which audio engineers need to do for a whole music production.

Stem tracks are available on Soundstripe with any Premium and Business subscription plan. To find stem tracks, simply click the down arrow next to a song title to display all available versions of the song:

You’ll see a tag indicating that track has stems, along with a list of alternate versions of the track. Alternate versions are not stems; instead, they provide shorter clips of the full track, but with full instrumentation.

Stem tracks are pared down to a single harmonic element. Once a song has been licensed, the Download Page will include a button for downloading stems:

The Download button can also be accessed from the Licenses Page to access stems from a previously-licensed track:

Interested in using the benefits of stems on your next project? Get a subscription or upgrade to Premium or Business today!