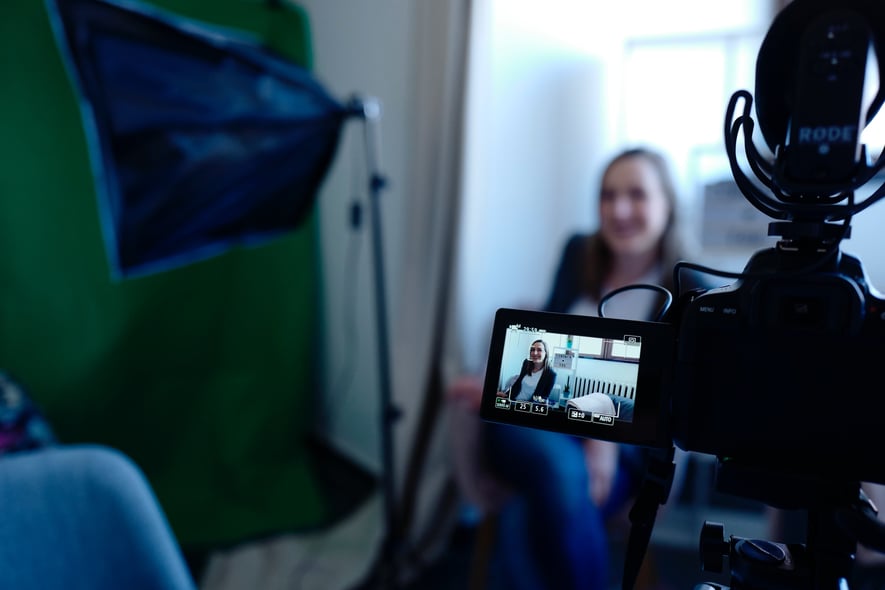 There’s always been an allure to the video. After all, humans are inherently visual creatures.

Video adds visual complexity and emotional depth that audio lacks. That’s one of the reasons video is quickly becoming the foundation of the modern web.

Like aspiring actors flocking to Hollywood for more exposure, creators are translating their work into video for YouTube in hopes of growing their audience.

The question you must answer is “Should I actually do a video podcast?” It depends. There are reasons for and against putting your show on video.

This article explores several reasons why you should make a video podcast, and one reason you might want to steer clear.

4 benefits of making a video podcast

1. Humans are hardwired to look at faces

Don’t be fooled when someone says “I’m a visual person.” We are all visual people.

This alone is a decent argument for making a video podcast, but there’s one type of visual humans are particularly fascinated by: faces.

Within the first 24 hours of their birth, infants start looking at the faces of other people — or things they think are faces. As we age, our propensity to look at faces only increases.

People gravitate to the faces of other humans because we’re hardwired that way.

We use other people’s facial expressions to develop emotional context. Did your latest joke kill or flop? Is your hashbrown casserole delicious or disgusting? You need to look at people’s faces to find out.

There’s science to back this up.

Researchers know humans have specific neural circuits dedicated to facial recognition. They live in the medial temporal lobe, and they go wild whenever you see a face. These circuits will push a face to the forefront of our attention, even when it’s competing with other stimuli.

So our brains react differently to faces. We prioritize them over other visual stimuli.

What the hell does this have to do with making a video podcast?

Well, if you put your face on camera, people are going to pay attention. It’s in our chemical makeup. And when people pay attention, your engagement goes up.

Video gives your audience another reason to choose your content instead of the flood of other stimuli they see every day. A video podcast provides a different sort of appeal that audio alone cannot.

In the 1960s, researcher Robert Zajonc demonstrated that you can change people’s preferences for something just by exposing them to it repeatedly. As people become familiar with something, they tend to prefer that thing.

A couple of years later, Charles Goetzinger tested this idea when he was teaching at Oregon State. Goetzinger started bringing a black bag to class and left it on a table in the back of the room during his lecture.

At first, people were weirded out. They treated the bag with suspicion, which is understandable. I too would question why the professor brought a strange satchel to class and sat it in the back of the room.

However, students eventually became curious with the bag and even developed an affinity for it. This is the basis of the Familiarity Principle.

It’s why the same people deliver the news every night. It’s also why brands bombard us with advertisements we barely pay attention to.

The same thing can happen with your video podcast. By consistently translating your show to video, your audience will become familiar with your face. Which means they might come to prefer you as host to others they can’t see.

Just like the black bag at Oregon State, you’re creating a connection with your audience by making them familiar with your appearance. This grants you a sizable advantage over your fellow podcasters who are not putting their face on video.

There’s no doubt podcasts are growing in popularity. But let’s be real: YouTube is absolutely gigantic.

By Google’s own estimates, over 1.9 billion people log into YouTube every month. That’s roughly 30% of everyone who uses the Internet. (Or so Google says).

In short, YouTube could be rocket fuel for growing your audience. Sure, you could upload the audio of your podcast over a static image, but then you’d pass up on the advantages I just outlined above.

“Without video, we hit a plateau; we couldn’t get past 10,000 [downloads]. When we started doing a video recording, we saw the best growth. It took two months to get to 35,000 downloads.”

So there’s evidence uploading video podcasts to Youtube can increase your downloads.

But if you really want to see results, you need to do some search optimization work. Even a little bit goes a long way.

Optimizing your videos is deceptively simple to do.

First, type in a phrase that relates to your podcast in Youtube and checkout the list of suggestions that autofill. 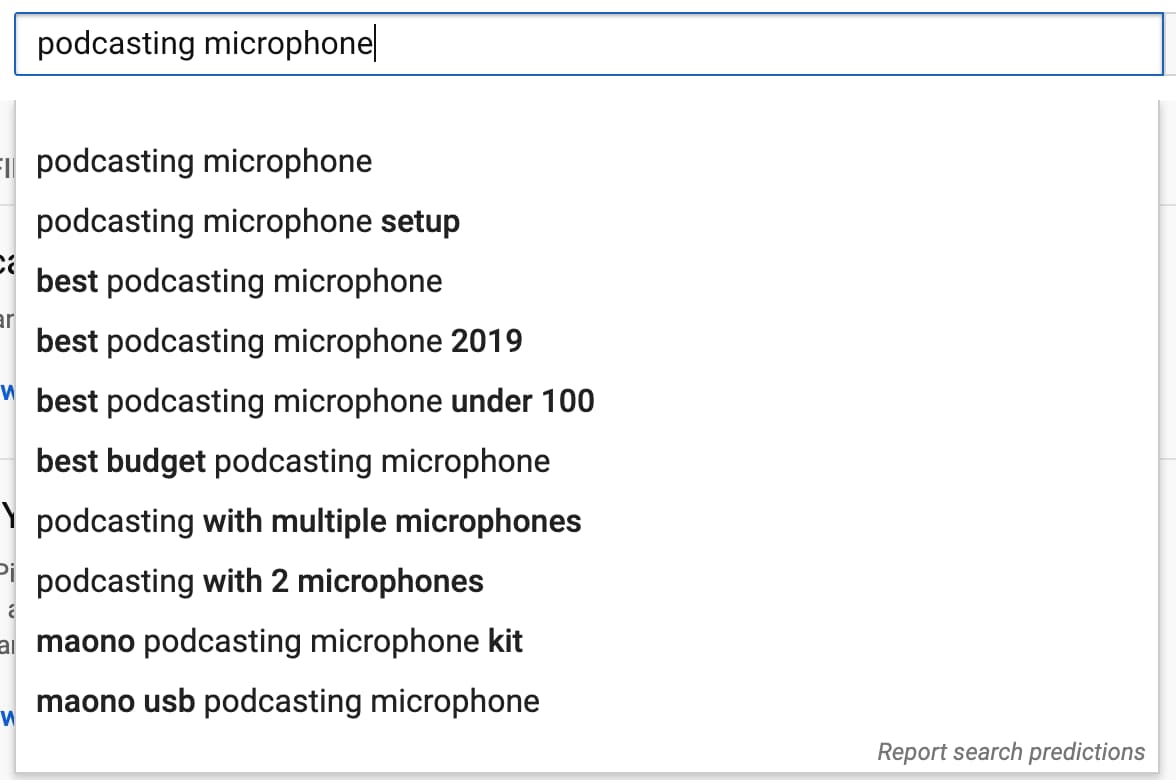 What Youtube thinks I'm looking for when I type "podcasting microphone"

YouTube is telling you these are topics people are searching for. Now, pick the one (or ones if there are multiple) and put them in the description of your video. Make the most relevant one the title.

Presto. Now your podcast video is more closely tied to what people are looking for, giving you an even better chance to attract more fans.

Oh, one more thing. If you’re worried about your podcast being too long for video, don’t. Brian Dean (who also has a killer Youtube SEO guide) did some research about which videos rank best in Youtube.

4. Social is made for video

If you don’t market your podcast, you won’t grow. You have a number of ways in which to spread the word, but social media has the lowest barrier to entry.

Here’s the rub: social media is optimized for video, not for audio. By default, the audio is muted on every video post. Not ideal if you’re trying to promote your new audio-only show.

The emergence of audiograms has made this problem a bit easier to solve, but having a full-fledged video podcast is a better solution.

Why? Because you’ve just got more options.

For example, you’ll want to post numerous times about new or upcoming shows. If you film a video podcast, you’ll have extra footage you can cut into short, sharable segments. You’ll also have behind-the-scenes content to share.

Creating variety in your marketing can increase engagement and keep people interested.

Another benefit of doing a video show is that you can do a live recording. It’s easy to start streaming on most major platforms. Plus, people like live podcasts. It creates a sense of inclusivity because your audience gets to engagement with you in the moment.

The main argument against video podcasting

It costs more time and money

Yep, you probably saw this coming. There are a number of positives to creating a video podcast, but those benefits come at a price — specifically your time and money.

Recording and producing an audio-only podcast takes relatively little budget. You just need a decent microphone, a room that doesn’t echo, an audio recorder, and some editing software.

Then you need to consider the space you’re recording in. It doesn’t need to be the Taj Mahal, but it should look somewhat decent, or you risk damaging your brand.

And finally, there’s cameras. Even one decent camera is a sizable investment, and then you need to grab the appropriate software to edit the video footage. If you want to create some dynamism and work with multiple cameras then your investment only grows.

And we haven’t even talked about the extra time you need to invest to edit the recordings, create social media content,  and optimize your videos on YouTube.

So, should you do it? In the end, it’s up to you. If you have the time and financial resources to invest, then yes, there are obvious, proven benefits to taking your podcast to the digital screen.

But if you’re just starting out, a video podcast might not be realistic. And that’s alright. In the beginning — or at any point really — the most important thing to focus on is the quality of your show.

In the end, that’s what separates your stuff from everyone else on the podcast circuit. For more resources on how to create an awesome podcast, check out: