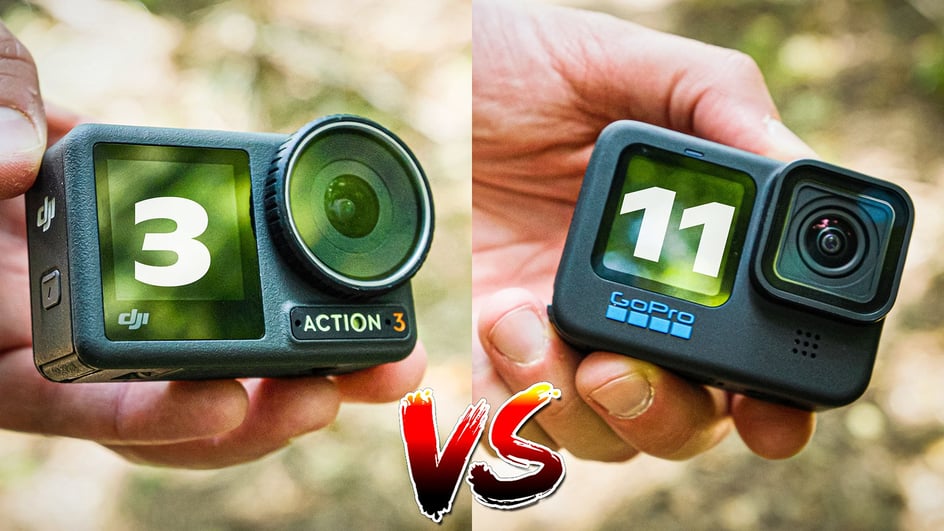 Let’s take an in-depth look at two of the top action camera options out there. (And explore if one of these might be one of our selections for the best YouTube cameras on the market.)

In one corner we have the GoPro Hero 11 Black. A familiar brand name in the action cam business, this latest GoPro is one of the manufacturer’s best yet and includes all of the high-end capabilities, sensor size specs and features that any run-and-gun video pro might want.

In the other corner though we have the DJI Action 3. Best known for their drones and stabilizers, DJI’s push into camera technology has shown that the brand is more than just equipment as their cameras are more than capable. With a similar price point, a similar camera sensor and plenty of its own bells-and-whistles, we have two great options.

But, which one is right for you? Watch the video below and explore all of the specs and features as we outline our arguments for each.

As you can see in the video put together by the team here at Soundstripe, we really do have two great selections to highlight. And with Chris and Dave (and Julian) behind the cameras, we get a true all-encompassing test of the capabilities of each. From sensor tests to stabilization to battery life, it’s great to see these two action cams pitted against each other so directly.

Let’s first take a look at some of the specs and key features for the GoPro Hero 11 Black which includes a 27MP image sensor (capable of POV video up to 5.3K240), with HyperSmooth 5.0 digital stabilization and Wi-Fi capabilities.

On the other end of the (very similar spectrum) we have the DJI Action 3. While maybe not as much of a familiar brand name in this space as GoPro, don’t let DJI’s gimbal and drone origins dissuade you from trying out their Osmo Action 3 Camera (either the standard or the adventure combos).

With a 1/1.7” CMOS sensor capable of DCI 4K60 video and plenty of wide FOV, the DJI Action 3 stands up quite well against its competition.

Which action camera is right for you?

Now, for our million dollar question. (Or, perhaps our $300 to $400 question?) Which of these two action cams might be right for you? And while we can certainly make our recommendation based on the video review above, ultimately this decision is going to come down to you and your unique video needs.

Dave sums up his findings nicely at the end of the video though by confessing that both action cameras are indeed quite similar in image quality and functionality. Neither truly blows the other out of the water with any features. Both should serve you well for pretty much any action cam needs.

However, if you do have a preference for one brand name over the other, then that might be your deciding factor. GoPro has been around for quite some time for a reason. They make reliable products that are tough and last a long time. DJI does as well, but these action cameras are a bit newer to them.

The DJI Action 3 is a bit cheaper though as well (as long as you get the Standard Combo). So it’s up to you, your budget, and the specific needs of your shoots and projects to decide which one is right for you.

If you’d like to read up on some other buy guides and gear reviews, check out these additional articles from the Soundstripe blog: