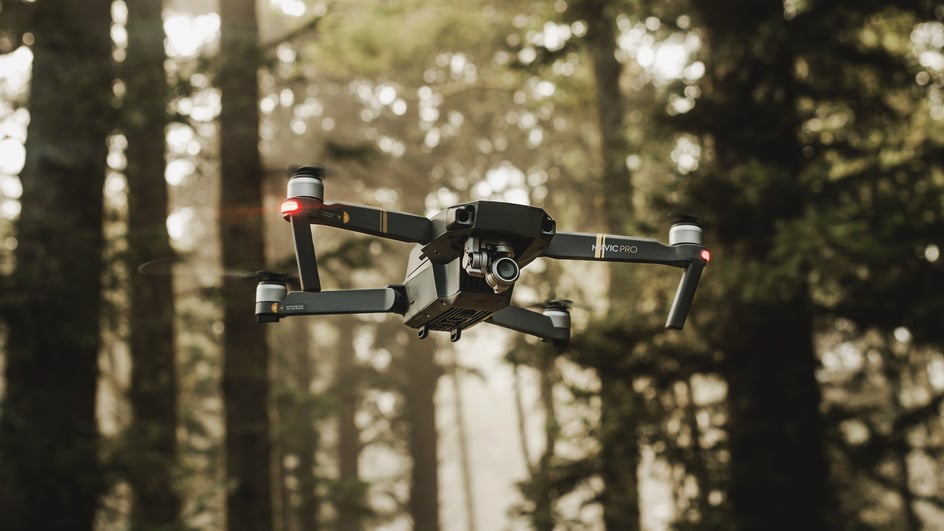 There’s a reason why some of us covet the window seat on an airplane, while others dread it.

Even from the lowest stratospheric vantage point, you’re level with or above the clouds. And during the descent, the physical distance between yourself and the ground — we’re talking tens of thousands of feet — can be unsettling to say the least.

In the time it takes for the pilot to land the plane, you pass over miles of rural and urban landscape.

It’s an extreme change in perspective. A bird’s eye view unlike anything we would ever see in our day-to-day routes and routines.

In professional and commercial projects, drone footage has a similar effect.

Whatever your area of expertise may be — i.e., real estate, weddings, film, travel, etc. — drone footage engages clients and viewers in a different way than close-ups or wide angle shots do.

But, given that a drone is an expensive piece of gear, is it worth the investment in the long-term?

Whether you’re a huge proponent of drones or a skeptic through-and-through, this article details what you should consider before making the final call on a new purchase.

Here’s a breakdown of what’s to come:

What Creators Say About Drones

In the video above, YouTube creator Matt WhoisMatt Johnson broaches the drone topic from a wedding filmmaker and commercial use perspective.

His review of the DJI Mavic Pro calls attention to a few of the typical pain points for videographers on the job: the size, loudness, and functionality of drones.

He points out that a drone like the DJI Mavic Pro could be beneficial for wedding filmmakers and other creators who need drone gear that is compact, quiet, and doesn’t draw a lot of public attention.

Matt also recommends buying your drone from a reputable company that has a good return policy, especially since this type of gear can be pricey.

Here are a couple main takeaways from his content:

Michael is transparent about the fact that learning how to operate a drone can be a time-consuming process. You might spend several days practicing with a flight simulator and still have a rocky start your first few times piloting the drone.

He goes on to share that he’s known many creators who invested in new and expensive drones only to sell them or simply not use them weeks or months later.

While this might not be your own experience, it’s a good rule of thumb to be wary of this possibility before making the final call on a drone purchase.

In this video, UK-based creator Chris Watkins Media shares his insight on why drones might or might not be worth the investment for you.

Offering drone footage as part of your client packages can make your work more appealing to prospects, but this isn’t a guaranteed outcome.

It’s important to weigh the costs when deciding whether to invest in a drone — because the expenses really add up.

Chris discusses the legal process for piloting drones in the UK, which is similar but still quite different from US regulations.

For instance, if you’re piloting a drone commercially in the UK, you need to pass the PfCO course to become a CAA-certified (Civil Aviation Authority) pilot.

This involves a two-day course, a theory test, a practical test, and 30 hours of test flights.

Even if you are commercially licensed in the US, you’ll still need to get this certification if you plan on filming in the UK.

Different places have different regulations, which adds another complication to filming internationally. But by knowing these rules ahead of time, you can make sure you have the time and resources you need to get certified.

One of the perks of capturing your own drone footage is that you can easily repurpose unused RAW footage to make stock drone footage for yourself and/or other creators.

Because it’s usually better to capture more footage instead of less, you might be left with an excess of footage that just didn’t make the cut for this particular project.

For your future projects, it might not be possible — time- or budget-wise — to return to that filming location and capture more footage.

By sorting through unused footage or preemptively capturing extra drone shots, you can begin building your own library of stock drone content that can be easily integrated into new videos.

A PSA for Videographers & Vloggers

Until recently — we’re talking February 2021 — videographers weren’t able to use drones for commercial purposes in National Parks without undergoing a rigorous permitting process.

This protocol changed in the aftermath of the Price v. Barr lawsuit.

In this court case, the judge ruled that the permits and fees that have been required for commercial filmmaking in National Parks are unconstitutional and a violation of First Amendment rights.

This means that now, if you’re a licensed drone pilot with a registered drone, you can film in these areas for commercial use without facing steep legal fines.

If there was only one condition that could sway more creators to invest in drones, this new freedom to film commercial video production in national historic sites might be it.

An Alternative to Filming Your Own Drone Footage

As idyllic as owning and operating a drone might seem, logistical complications can be a major hindrance when capturing your own stock drone footage.

Maybe you don’t have the time or budget to travel to new locations to make your own stock drone footage. Maybe you’re still on the fence about whether you’ll get a good return on your investment.

Or maybe you bought a drone, tried it out, and discovered that it’s not as practical for your filming needs as you hoped.

The good news is that you don’t have to make a rash decision now, one way or the other.

With Soundstripe, you have unlimited access to a catalog of stock drone footage and more. And the filter functions make it easy to narrow your search to aerial shots of cities, animals/wildlife, etc.

If you’re still weighing your options, why not sign up for a free account and peruse our video library? There are no costs or strings attached.