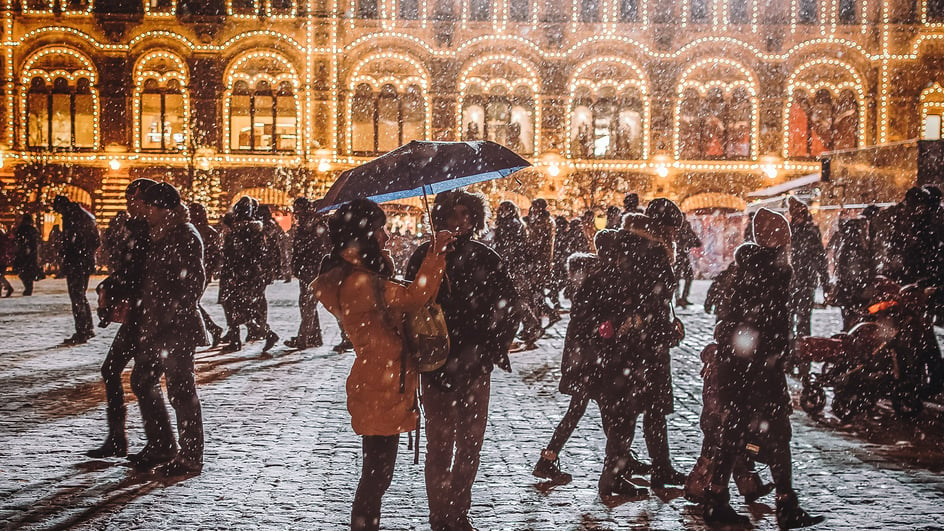 A beast-like demon called Krampus, 13 troll-like Yule Lads, and Kentucky Fried Chicken. Believe it or not, all of these things are part of the Christmas tradition — not the product of some seriously strong hallucinogens.

Christmas is many things for many people — a religious celebration, a corporate holiday, a heavily commercialized phenomenon, etc.

Some children grow up leaving out milk and cookies for a man in a red costume called Santa Claus, while other children leave their best shoes out on the windowsill to collect gifts or rotting potatoes (depending on the naughty-or-nice factor).

Over the years across the world, Christmas has been celebrated in different ways and with different lores. A long-held tradition for a family in Iceland might seem unconventional to a family celebrating Christmas in Japan, but both traditions are of course valid.

Something that is unconventional in one culture is part of the status quo in another, and that’s because the term “conventional” has subjective meaning.

But for filmmakers and other creators, good quality Christmas music is essential but not always easy to find and license within set budget and deadline parameters.

Fortunately, we’ve created this guide — and included a few holiday-themed playlist resources — to simplify the process for you.

This guide will cover:

How Christmas is celebrated around the world

Here’s the thing. We can’t just mention Krampus, Yule Lads, and fried chicken at the top of this post and say nothing more about it. (We’re not monsters.)

So, before we get into the music, let’s first address some of the cultural differences in how Christmas is celebrated throughout the world.

In the U.S., for example, Christmas is a federal holiday that has religious ties to the Christian faith (for many people, that is). When observing this holiday, families might stage a nativity scene, decorate a massive fir tree with ornaments, and exchange gifts.

However, traditions like this vary from family-to-family and culture-to-culture.

Several time zones away, a family in Iceland might celebrate by honoring the lore of the Yule Lads or Jólasveinar — 13 troll-like figures who leave gifts or rotting potatoes in children’s shoes during the 13 days leading up to Christmas.

Meanwhile, a family in Austria might grow up with the more terrifying lore of Krampus, a devilish creature that captures bad children and leaves behind the good ones.

And then in Japan, a popular tradition is for families to celebrate the holiday over a bucket of Kentucky Fried Chicken. (Admittedly, this is much less daunting than rotting potatoes or a creature that abducts children.)

What’s important to remember is that Christmas isn’t isolated to one country, one culture, or one family. The holiday season means something different for everyone, and these examples are just some of the ways that people celebrate Christmas.

The role of music in Christmas traditions

When you think of Christmas music, maybe the first thing that comes to mind is carol singers or a church choir. Or maybe it’s a flashback of a time when you were watching a film that had a memorable holiday-themed soundtrack.

Whatever the case may be for you, music has always been part of the Christmas traditions that take place both on-screen and in real life.

But what actually classifies as Christmas music?

Well, Christmas music spans all genres — R&B, pop, classical, indie, you name it. It’s a category of music that can make us feel nostalgic, happy, somber, or a wide range of other moods.

While Christmas music certainly can have religious meaning — think songs like “Silent Night” and other hymns — many of the classic holiday tracks that we know and love exist outside of nonsecular culture.

For instance, some of the most popular Christmas songs are about the lore surrounding jolly old St. Nicholas and his reindeer. “Santa Claus Is Comin’ to Town” and “Rudolph the Red-Nosed Reindeer” are two prime examples of this.

When it comes to Christmas music, every country and culture that celebrates this holiday has their own Christmas classics. And this music is as much a part of the Christmas tradition as anything else.

We all know and love the classic Christmas songs that play on the radio or in our favorite films. The trouble is that for filmmakers, videographers, and other content creators, this music is extremely difficult (and costly) to license for creative projects.

What you want is simple: To find and license Christmas songs that are great quality without costing your production team an arm, a leg, and a partridge in a pear tree.

Fortunately, you can get what you want by licensing royalty free music from a stock media company like Soundstripe.

In this section, we’ll share 20 royalty free music alternatives to five of the most popular Christmas songs in the U.S. and abroad. If you like what you hear, we’re also listing out which playlists you can go to in the Soundstripe library to find more songs with a similar tone and feel.

A little-known fact about this track is that it’s often titled as “Run Run Rudolph” instead of “Run Rudolph Run” when covered by other artists.

2. Mariah Carey's "All I Want For Christmas Is You"

This music video for Mariah Carey’s chart-topping holiday hit has generated more than 600 million views since it was uploaded to YouTube in 2009. The song itself was released 15 years earlier in 1994 and has since been featured in classic films like “Love, Actually” (2003).

When this song was first released in 1984, it became an instant Christmas classic. For many consecutive years, “Last Christmas” has been a top-charting song for weeks during the holiday season.

Written by Irving Berlin, “White Christmas” is still revered as one of the greatest Christmas songs of all time.

Bing Crosby first performed this song on his radio show in 1941 and then as part of the film “Holiday Inn,” which was released the next year. (You can watch that performance in the video above.)

5. The Pogues and Kirsty MacColl's "Fairytale of New York"

This Celtic rock Christmas song was first released as a single in 1987 and then included in the Pogues’ album “If I Should Fall from Grace with God.” What you might not know about this holiday classic is that it 1) went through many rewrites and 2) got its name James Patrick Donleavy’s 1973 novel A Fairytale of New York.

Licensing any chart-topping song is never easy for creators. In order to license a song like “Last Christmas” or “All I Want For Christmas Is You,” you’ll need the right industry connections and then extra time and money to spend during (and after) licensing negotiations.

When you’re working with tight budgets and close deadlines, you want to avoid any added hassle or headache that you can. Luckily, when you license royalty free Christmas music through Soundstripe, you can save time and money without sacrificing quality.

Whether you’re producing a film, commercial ad, or other project, take some time to peruse Soundstripe’s music library and playlists so that you can find the music you want sooner and easier.